Have You Been To New Mexico? Epic Vast Beauty. Join Mary Vee For A Quick Trip

This is not my first time driving through New Mexico. If I have my say, it won't be my last.

This state has colorful landscapes mastered.

Someday, I hope to actually stay here a few days here. Probably not in the summer. Too hot. For now, New Mexico serves as a link to my destination. A link worth capturing on film and sharing with you. 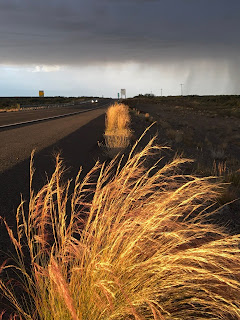 I drove south on a two-lane highway.

The sun rose to my left.

A desert storm crept over the mountains and spilled into the vast, flat scrublands to my right.

Rain tumbled onto the thirsty land. In the sky, it looked like a fine mist, but the drops that hit my windshield were large, plump, and wet. 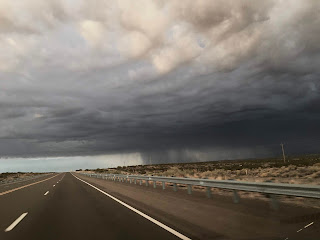 The storm continued to push across the sky.

The rising sun revealed waves of color in thin portions of the cloud.

Back where the rain fell, darkness loomed. 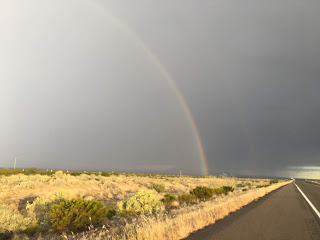 Experience has taught me, the best photos are usually behind me. I turned and saw this rainbow pop out of nowhere.

The sun dazzled the brush.

The storm cloud darkened the sky.

But the rainbow took center stage. 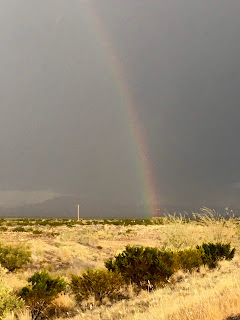 I had to take a second photo for you.

Notice the mountain? It's barely visible on the lower left.

Also notice that where the rainbow colors darken, the sky also is darker. 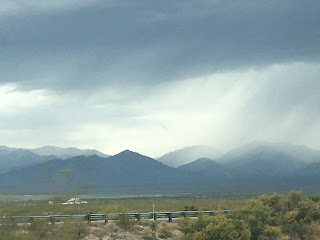 Even after turning west, a row of storms formed interesting contrasts, helping us to see so much more. 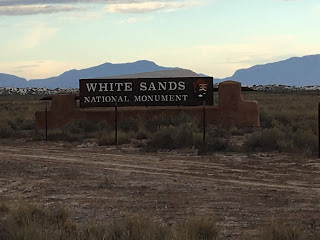 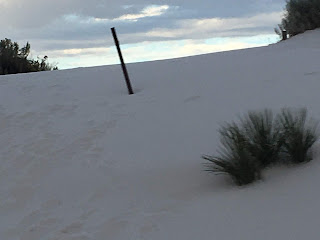 I had remembered an interesting fact about this place. One of the shuttles could not land at Edwards Air Force Base. Mission Control scrambled for a second landing strip. Although, prepared, White Sands did not expect to become the rescue landing site that day. 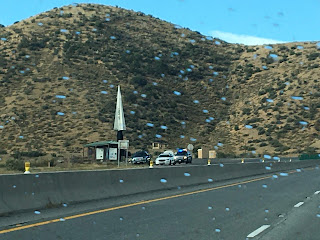 White Sands is also know for being a testing grounds for missiles.

I had passed a valley and driven up to this mountain pass. Excuse the rain on the windshield. I probably wasn't suppose to take this photo. I realized why every scenic pull out on the other side was blocked by officials and there were no vehicles going the other way. A little farther up, all traffic east bound had been blocked by officials. I assumed the same had happened somewhere behind me.

Conclusion: a missile was being tested. 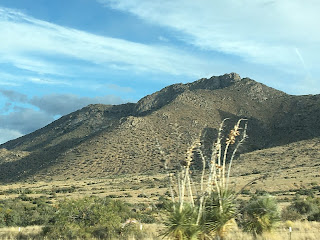 As the miles separated me from White Sands... 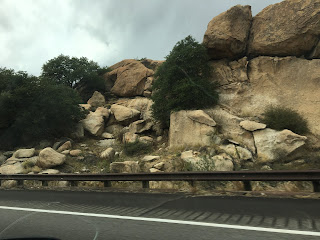 and I neared Arizona, the terrain changed drastically. HUGE boulders neared the road.

Some of them looked like shapes. If you have seen the movie The Neverending Story, think of Rockbiter, or Galaxy Quest's  rock character. 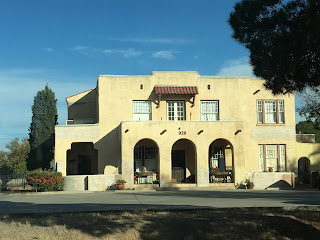 Before leaving New Mexico, I photographed this home. Isn't it beautiful? I wouldn't want to live this close to the road, but the rest sure seems enticing, eh?

Then Tevye's song, "If I Were A Rich Man" popped into my head.

I hope you enjoyed this short visit to New Mexico. I am hoping to take you again someday.

I have the perfect book for you. It is my new release. A short. Fun. Detective story. Readers are taken, step by step, like Agatha Christie's detective, Hercule Poirot, on the case. Wealthy Sylvia Duvet is missing. The estate's staff is devastated. The holidays are approaching. Where is she? What will the gossipers, social media, and newspapers say? The family name will be ruined if she isn't found soon. 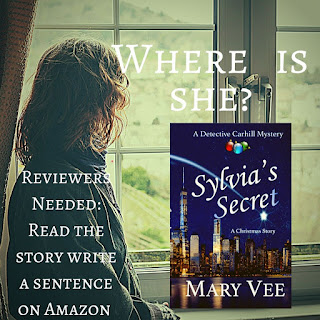 Thank you! Every review helps others see this book.
Posted by Mary Vee Writer at 11:20 AM