A Second Castle Ghost Story Heard on the Rhine 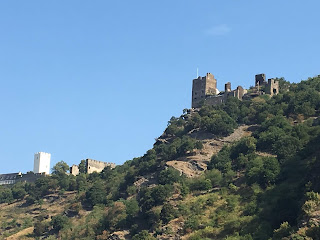 This is the ghost story of the Enemy brother castles.

The white castle to the left is the Liebenstein Castle.

The brown castle to the right is the Sterrenberg Castle. 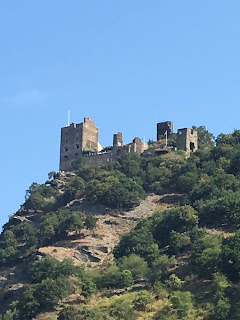 Because of important accomplishments, the owners received Imperial Knight Status.

Like many families, the children didn't get along. Two sons in particular.

Although the younger was considered the braver, he was expected to stay home and care for the land.

The older brother, a shy fellow, went to war.

The older brother's war journey took him to Greece where he met a beautiful woman with whom he fell in love and married. 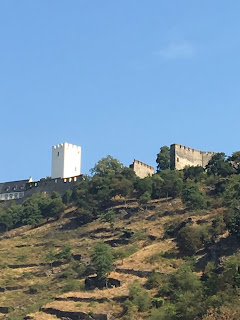 By this time the two brothers had separate castles. Due to their warring, a wall was built between the two, which can be seen in this photo.

When the younger brother met the older brother's wife he immediately fell in love with her and she with him.

But because she was married to the older brother, and because couples did not divorce in those days, she chose to live in an Abby. Unhappy.

The younger brother so desperately loved the beauty that he died early of a broken heart.

When the beauty heard the news, she too died shortly afterward of a broken heart.

The older brother was unable to handle the distressing news and committed suicide. Their ghosts live on, forever brokenhearted over a lost love.

Sounds like a story Shakespear would write about, eh?

This story has been brought to you by the one word: GhostsOnTheRiverRhine
Posted by Mary Vee Writer at 10:30 PM

A very interesting story. It sounds like a drama that could be a block buster, today.

Or any period of time.