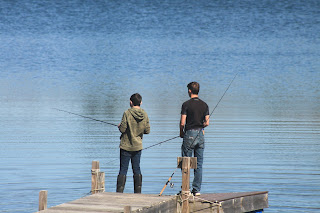 Two young men came to the house yesterday. No, they weren't selling anything. They wanted to know if they could fish from the dock.


Rewind to the last three summers.

The dock that came with the house had missing boards. Some of the boards didn't hold weight. Until we could afford to repair it, we chose not to use it. One day we found a neighbor sitting halfway down the dock with his feet in the water. He played his music and invited friends.

First, and most importantly, the dock was dangerous.
Second, it was private property and had a sign indicating such.
Third...well, it just wasn't nice since he didn't ask. 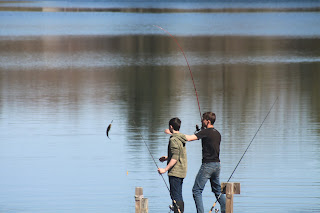 Apparently the previous owners of our home let mostly anyone who pulled in the driveway have access to the yard and lake.

At least fifty cars pulled in those summers, assuming they could park in the drive as before then head across the yard to the lake.

We set a policy. We would say no to all, not to be cruel, but to keep these individual from walking the dock and possibly getting hurt and to enable our free access to our driveway.

The dock has since been completely replaced. The lawn has been groomed. The driveway redone. And we have enjoyed our peaceful home in the woods.

Fast forward to the young men on the porch with fishing poles and the kindest manners and the biggest hopes asking to fish off the dock.

I thought.
Hubby thought.
And in truth, we want to watch them catch some fish.


So, we said, yes, with the condition that they not spread the word. 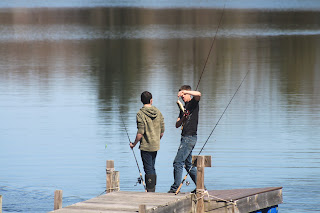 For the next two hours, these boys casted and brought in big and little fish. The little fish, they wisely threw back. When they were ready to leave they stopped at the door, offered to shake our hands and said, thank you.


It's so easy to close ourselves off from those who have mistreated us. But when we do...we miss out on meeting those who can bring us joy.


This post has been brought to you by the one word: Neighborly
Posted by Mary Vee Writer at 10:30 PM

I'm glad you had a good experience with these two young boys. It's not often that people take the time to thank others for allowing them to use their possessions. Peace and Blessings to you and yours.