The Week That Changed Eternity - part 2


There are three days 'till Good Friday. Days to remember what was done for us.

This week, I am sending you daily posts to break up this deep discussion into portions because it deserves our attention. ALL PHOTOS in this post are by Mary Vee.

Last year, about this time, I went to Israel with hubby and recorded the stations of the cross. It is a moving journey. One that slips events in the Bible from words to reality.

Walk with me. You don't have to pack a bag or save for a long airplane trip. You can go with me. Right now.


Station 4: To remember the place where Jesus met His earthly mother. Imagine her heart as she watched Him struggle to walk. Beaten. Blood dripping from him. The crowds yelling and mocking Him. She could do nothing to help. She couldn't petition. She couldn't break through the crowd to run to his aid. She loved Him not only as her son but also as her Savior. She couldn't do anything to stop His crucifixion. She was about fourteen years older than Him was all. She loved Him.

He knew how she felt. He KNEW how her heart ached about the situation, and yet He loved her and us so much, He chose to continue rather than using His power to call on ten thousand angels to aid Him in His pain. To stop the crucifixion.

This is the place remembered for where Jesus saw her on this walk. There is a courtyard before the church symbolizing where she might have stood. 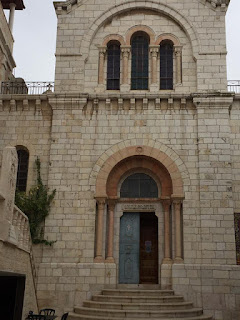 Station 5. A soldier was bent on getting his job done as ordered and timely. He was to escort Jesus to the hill. The soldier pulls a man from the crowd to speed things along. His name was Simon the Cyrene. The soldier forced him to help carry Jesus' cross. Simon was given no opportunity to resist. The soldier yelled for them to get moving. He forcefully prodded both to obey. 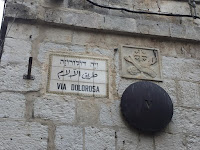 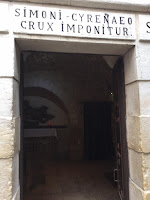 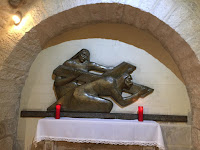 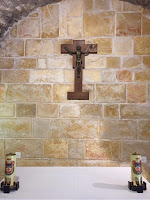 Station 6. These are the narrow streets where Jesus walked. The city is built on a hill, so to walk the street is to either walk up a hill or down one. Here he walked up a hill with only remnants of physical strength.
It is said that a girl named Veronica stood at this point of the journey. She is reported to have longed for an image of Jesus because of her love and belief in who He is. Such an image is said to have appeared on her veil. The name Veronica has since taken on the meaning: true image of Christ. 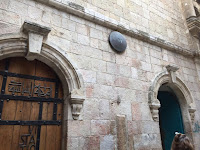 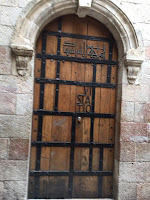 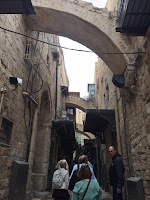 With the conclusion of the first six stations,
I will give you a chance to think on these things and respond. Scroll down to see the previous post with the first three stations.

This post has been brought to you by the one word: WhatJesusDidForUs

Mary: I didn't know the meaning of the name Veronica. I love these pictures. Thank you for sharing them with us.