A Tale of Two Cities Unknown to Dickens

Today I want to share with you news that only this week came to my attention. My research led me to the original article published in The Atlantic on October 22, 2013.

This is a tale of two cities.

That do not exist in pages written by Charles Dickens. 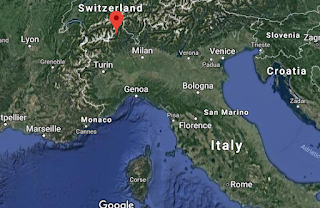 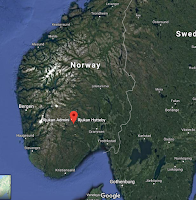 are small cities located in valleys surrounded by mountains. Although located far from each other, they suffered the same problem.

Up to six months of the year, both receive very little sunlight.

While many global cities rest in valleys, Viganella and Rijukan are swaddled by the Alps and Galdhøpiggen mountains respectively. These giant mountains shield the valley below from precious sunlight.

If I were to visit either quaint city, I would only do so during the six months of sunlight. I really dislike the dark.

And so did the residents. The word did is very important.

Like a Hans Christian Andersen story, 197 people of Viganella came together and talked about the problem. The mayors are credited with the solution,

I'd like to imagine that a child attended that meeting and said, "Why not put a mirror on top the mountain to reflect the light down on our village?"

All the children chimed in, cheering their friend's great idea. The parents, though said quite another word. They uttered ridiculous.

"How much would a giant mirror cost?" a man asked.

A woman pointed toward the peak, "How would we get it up there?"

"What if it fell down on the city. We'd all be killed."

Questions popped in every adult mind. They looked for problems in every way.


For days the towns people talked about the ridiculous idea of mounting a giant mirror on the mountain. They drank their coffee and talked. They stopped each other on the dark afternoon streets and talked.

And while they chattered on and on about the reasons why a giant mirror could not help their problem, a teen, well beyond her years in intelligence, made drawings and punched numbers into a calculator. She figured in the height of the mountain, researched the greatest wind speeds, factored in the position of the reflected sunlight.

And while she couldn't find a way to shed light on the entire village, her numbers showed the town square could have sunlight. She bundled her many papers together. She slipped on her winter coat and set off for the town square.

Now, at this time of day, men and women gathered at the fountain in the center for this was when they shared the days events and talked about problems.

The teen stood by the fountain. She held her bundle with one hand high into the air. "I have done the math. A mirror can be placed at the top of the mountain and angled in such a way to reflect sunlight on this very city square."

The school teacher read through her papers. "I believe this idea might work," he said.

The councilmen and mayor read through her papers and they agreed too.

The people formed committees to set up fundraisers. They contacted builders, climbers, installers, computer experts and all matter of skilled workers for this sort of project. The first approved blue prints gave the people hope.

The people of the town gathered in darkness and waited. Their eyes raised to the mountain peak with a giant mirror mounted. The mayor signaled the computer operator to start the program.

The children squealed in anticipation.

Dads and moms, boyfriends and girlfriends, even neighbors hugged waiting for the moment.

197 townspeople rejoiced. They clapped and danced in sunlight. They slapped each other on the back in celebration.

The mayor stood on the edge of the fountain and proclaimed December 17th  A Day of Light.

No one remembered who suggested the giant mirror. It must have been the mayor.

But the little boy remembers.

And the female teen who worked endless hours to determine the probability remembers.

She texted her cousins who lived in Rjukan, Norway. They told their friends who told the townspeople who sent the mayor to see the giant mirror in Viganella, Italy. When he arrived, the mayor of Viganella took him to the town center and said, "Watch."

On October 18, 2013 the people of Rijukan, Norway gathered in their town square and for the first time in a history of long dark winters, they watched the sun reflect down on their town.


The news article didn't give these details. But this I know...the people lived happily ever after. And it wasn't "the end". It was "the beginning."


You simply must see the photos for this great project. Here is the link to the article in The Atlantic complete with large sunny photos:

This post has been brought to you by the one word: OnceUponATimeInATaleOfTwoCities
Posted by Mary Vee Writer at 10:30 PM

This is so interesting. Thank you for sharing this.

Playing the role of Hans Christian Andersen to show the amazing solution these two towns made, was a lot of fun. :)