Laughter and Singing at the Homeless Shelter


It was a night to remember.

A night to tell friends about. So I am... 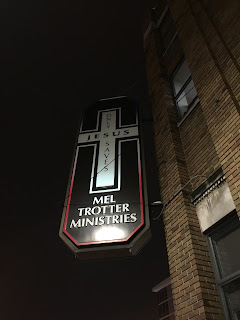 Fifty men, women, and teens rode in busses on icy expressways into the inner city. They poured out of the bus at a homeless shelter unsure where to go, what to do, or what to say. One led the pack through the main doors, pass security checkpoints, and on through winding hallways to a large room.

At night, this room is filled, wall to wall, with cots, blankets, and at this time of year, cold homeless men, women, and children.

On this evening before the night, hundreds of chairs formed straight rows and faced a platform.

The fifty set up sound and instrument equipment. Singers cozied in the limited platform space. Instrumentalists tuned their instruments.

A few residents poked their heads in the door. Intrigued, they came in and watched the first measures of several songs start, stop, start again. Microphone levels adjusted. The singers laughed. Chattered. The group stepped off to the side and waited for 6:30.

Something amazing happened when the clock struck 6:30.

Other than the concert with the fifty singing as they usually did for concerts, and the homeless watching with blank stares as the fifty expected an invisible spark happened.


Neither group did anything special.
But something amazing happened inside the room.

The residents smiled. They clapped and sang along. The fifty sang with a new robust which egged the residents to stand and join in.

The stoic uncertainty fleeted from the room.

Inspiration blanketed the room, causing both residents and the fifty to sing with their whole hearts, all praises to God.

The fifty shouted Amens at times.

And as the last verse of an enthusiastic rendition of Go Tell It On The Mountain ended, the residents, who had sat back down, leaped to their feet again and sang along. They cheered at the last note and pleaded for more.

But this was not a time for the fifty to be on a platform and the residents at their chairs. The fifty left their positions, stepping out toward the residents who warmly welcomed them.

Among the fifty was one man in a wheelchair. He tended to be shy. But during this gathering time, he wheeled his chair to the back of the room where he met a homeless man. They spoke for a time, then hand in hand, prayed for several minutes. Seemed they helped each other with strong, healing words.

Residents, workers, and the fifty helped to clear the room, ready for night ... a place for cold homeless men, women, and children to sleep.

Yes...This was an evening to remember....


This post has been brought to you by the one word: GodSpark

Mary: Thank you for sharing this. It touched my heart.

Reading this with tears streaming down my face as I remember this magical, God-blessed night of joy. This night felt like Heaven, and definitely like Christmas as it should be. Thanks Mary, and Merry Christmas to you and your family, especially the new little grandbaby!

Thank you, Lori and Merry Christmas to you and your family!
Oh, and hopping on the grand wagon is so exciting.

Thank you for writing this, Mary. It was truly a blessing to be able to witness God’s work in the residents’ lives as well as ours!

Thank you for sharing! What a blessing for everyone involved!