We've all had something fail. Maybe a school assignment, baking a cake, changing a car tire. Well that was my shortlist confession. There really is a mile long list that you don't want to hear.

Talk about a quick drive to the blues. Even one negative comment in a barrel full of praises can take us down. Sigh. Why oh why do we remember the one negative one and forget the positives.

You are not alone. We all do this. But there is a way of escape. Today, Suzanne Woods Fisher is going to share her story.

The Fear of Failure

Years ago, before I received my first book contract, an editor returned a manuscript to me with the comment that the writing wasn’t up to her publishing house’s “caliber.”

That was a tough remark to swallow. But I did. I gulped down my pride, asked her for editorial comments about the manuscript, and she gave them to me. I read them carefully, incorporated what I could, and then I moved on.

I didn’t wallow. I didn’t stop writing. In fact, truthfully, I didn’t agree with her assessment. Instead, I kept improving the manuscript, sent it out to other publishers and, eventually, received a book contract. Since then, I’ve developed a very thick skin, taking rejection in stride so it doesn’t derail me as it has in the past. And trust me, it did!

It started when my youngest daughter ran for class treasurer of her high school freshman class. The night of the election, she received news that she had lost. I found her sobbing on her bed and sat down next to her, not saying anything for a while.

After her sobs drizzled to sniffles, I told her how proud I was of her for trying. Just for trying. For being willing to take a risk. She did something that ninety-nine percent of her class couldn’t or wouldn’t do. I couldn’t have been prouder of her if she had won or not; I only cared that she was willing to try.

It dawned on me that God was rooting for me in the same way I was rooting for my daughter. He wasn’t waiting to be proud of me until I was successful. He already was proud. By continuing to write, I was willing to face my fear of failure, trust Him, and just keep trying.

Little by little, failure became less of a big fear. If the worst thing I faced in life was a ton of rejection letters, well, I could handle that. My confidence rests in God alone. 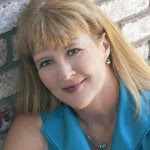 By the way, my daughter ran for sophomore class treasurer and lost. She ran again in her junior year and, this time, she won! But I think she really won in that first election—maybe not with votes, but with something far more important.

About Suzanne Woods Fisher: She is an author of bestselling fiction and non-fiction books for Revell about the Old Order Amish. Learn more about Suzanne, her books, and her weekly radio show by stopping by www.suzannewoodsfisher.com. Download the free app, Amish Wisdom, to receive a daily Amish proverb. A moment of peace and calm in a busy day.

Suzanne lives in California with her family. When she isn’t writing, she raises puppies for Guide Dogs for the Blind. To Suzanne’s way of thinking, you can’t take life too seriously when a puppy is running through your house with someone’s underwear in its mouth.

Thank you Suzanne for joining us this weekend!

This post has been brought to you by the one words: TrustGod and KeepTrying

Mary: This is a very interesting concept. Thank you for the reminder that God is proud of us no matter the outcome.

So true. So true.
What is sad is those who don't know that the one true loving God wants to be proud of them too.

This is such a beautiful read. This definitely brought a lot of facts to ponder upon regarding one's spirituality and belief in God. I do not remember enjoying any post like this before.

Thank you. Welcome to Let's Talk. I hope to see you again.

This content is written very well. Your use of formatting when making your points makes your observations very clear and easy to understand. Thank you.

The blog article extremely amazed to me! You're composing is great. In this I took in a ton! Much obliged to you!


Confessions of a twice cancer survivor my journey