Masada is a one of my top places to see in Israel.

I've borrowed these photos from my nephew's brother-in-law...with his permission :) 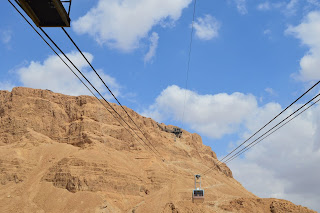 The word Masada is Hebrew for fortress. I didn't know that. How fitting.

Masada wasn't like some city surrounded by massive walls with weapons of mass destruction aimed at potential enemies.

Masada was a plateau-mesa. A very high, isolated flat land, more of a rock. It overlooks the Dead Sea.

I went to Jewish sites for information choosing to share their take on the story. 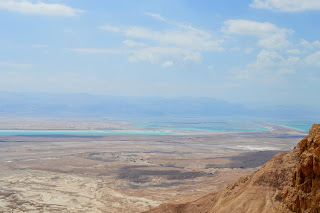 The rebellion started long ago when the Greeks first forced Jews to worship other gods. In time past, it's true, there were Jews who chose to worship other gods, but the Greeks levied laws that not only forbade Jewish worship in the Temple, but forced Greek worship on the people. Death was the penalty. A rebellion rose up from the faithful to God and over a period of years resulted in the Hanukkah celebration and Jewish freedom to worship in the Temple. 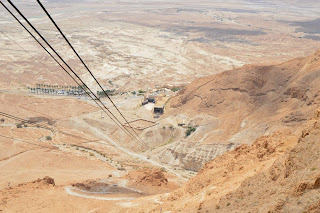 The Romans, being a stronger and larger army built ramps at the base of Masada. In time they gained a strong hold that would enable them to reach the top and conquer those in the rebellion. 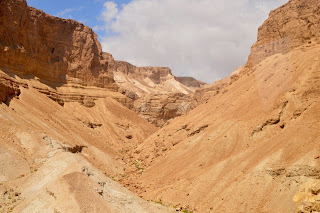 The leader of the rebellion gathered the people and presented a plan. If the Romans reach us, he said, they will kill our wives and children. They will attack our women and harm our children. We cannot hold them back from attacking. Let's foil them by leaving no one for them to claim victory.

Blazer ben Yair was the leader.  This was his final speech to the rebellion:

Since we long ago resolved never to be servants to the Romans, nor to any other than to God Himself, Who alone is the true and just Lord of mankind, the time is now come that obliges us to make that resolution true in practice ...We were the very first that revolted, and we are the last to fight against them; and I cannot but esteem it as a favor that God has granted us, that it is still in our power to die bravely, and in a state of freedom. 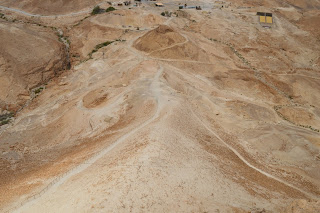 He devised a plan that would peacefully eliminate each person. Using the same principles for sacrificing lambs, families were killed by the head of the house, the heads of many houses would then kill family heads. And so on up until only the main leaders were left. The leaders chose one person to be left then he was to kill himself. 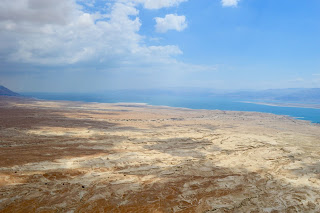 The Romans did climb to the top of Masada. In the heat they dragged their weapons ready to conquer. To their surprise, they found no one alive.

And so you may ask, how could I possibly be intrigued by a group of people who chose to end their lives? Because they knew their lives would end by the Roman sword that had denied them the right to worship God. Worshiping God meant that much to them.

This post has been brought to you by the one word: FreedomofWorship