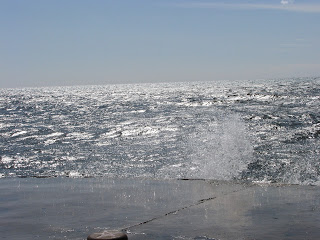 Hard to believe on these chilly days of winter, but it is.

Teens, men, women, and families head for the beach and snatch as many sun rays as they can before heading back to their snowy homes.

Like everyday life, even the most prepared can be caught unaware.


A few weeks ago a man and his wife visited a Californian beach. They were excited to swim in the Pacific ocean.

The waves roared, stirred by the wind. A soft blue sky draped the heavens above. Birds flew overhead. Sand squeezed between their toes. The water invited them to swim.

The man and women set up their beach chairs. She sat down and took his towel. He walked to the water's edge allowing the water to cover first his toes then his legs. He had long been a good swimmer and couldn't wait to dip his head under the salty water.

He prepared his goggles and fit them snug against his eyes then walked deeper. He stood in five feet water enjoying the waves rocking against his body. He looked to the shore and waved to his wife who had looked up from her book.

Suddenly a large wave struck him from behind. It slammed into his head and pulled his feet out from under him. His goggles flew off his face as he tumbled around and around in the wave.

Fright consumed him. He moved his arms and tried to right himself in the water but couldn't. In his panic he prayed.

He thought for sure he would see God at any moment.

Then, just as fast as it sucked him into the water, the wave returned him to the shore.

This happened only three weeks ago to my Sunday School teacher.

The power of the experience came through his telling of what happened.


Just as the wave came upon him, an experienced swimmer, and caught him unawares, so also can temptation or trials.

So this was his point to our class:

At any and every moment, we must keep our eyes on God. Our protector. So many times we don't see when Satan is ready to attack us. God is ready and willing to help us through temptations and trials if we only call on Him.

Each reader, including myself will have a unique takeaway from this post. May God show you what is to be yours.