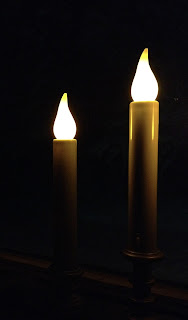 Set aside the crazy aspects that take place, you know what they are, and think of the heart meaning of Advent with me.

Breathe in deeply. Hold the air. Slowly release. Ready? This is a time of wonder and preparation. Dedicate your thoughts for what is about to come: The celebration of the birth of Christ the King.

Okay, I couldn't get Italy off my mind for today's post. Why? Because Michelangelo's four Pietas are seared in my memory from my trip to Italy this last October. The power. The emotion. I could have stood before each one for hours, so deeply impacted with the message. 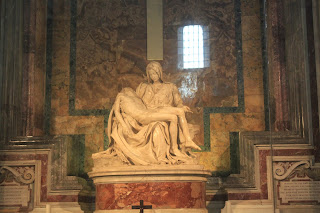 Here is the artist's first Pieta. Showcased in St. Peter's Basilica in the Vatican City. Seeing this piece was beyond inspirational. Michelangelo sculpted this piece when only twenty-three years old. Mary is portrayed as a young person, indicating that Christ died even for her. See the way she holds Jesus as a nurturing mother? Michelangelo's portrayal of Mary and Jesus is breath-taking. Consuming. Powerful. 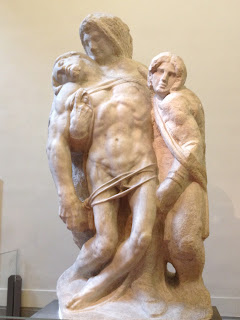 The Palestrina Pieta on display at the Accademia Galleria in Firenze, (Florence), Italy was Michelangelo's second attempt to satisfy his image of this scene. In the hall leading up to the famous statue of David are these magnificent works all by Michelangelo. What took me back, and caused me to just stand before these works and look at them was the passion expressed in the pieces. The reality of Jesus's death after coming down from the cross. The compassion, and determination to take his body to a safe place on Nicodemus and Mary's face. And it's not just their faces, the passion is expressed in Jesus's lifeless legs, Mary and Nicodemus's muscles holding their blessed Lord. How could we but feel the truth of this scene? As matter of fact, Michelangelo was so consumed with the expression of emotions that he walked away from this piece feeling he hadn't done a good enough job. 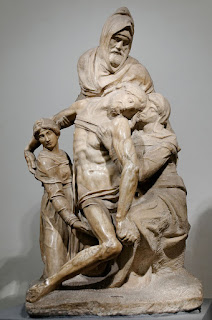 Michelangelo quickly felt compelled to make a third. This is the Deposition Pieta and is on display in the Museo dell Opera in Florence. Michelangelo began this work when he was seventy-two without being commissioned. He was making it for his own tomb. So consumed with this scene, he sculpted his own face in for Nicodemus, demonstrating his heartache for the sin he had done to cause Christ's death. Again, in frustration for not getting the piece the way he wanted it, he tried to destroy it. He left the piece broken and never returned to it. Another artist was hired to make repairs. Notice that the first Pieta had Mary and Jesus. The second one added Nicodemus, and this third one adds Mary Madeline. This is a magnificent work, all chiseled from one piece of rock. 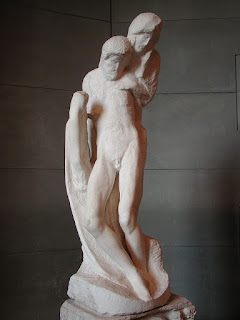 Rondanini Pieta is on display in the Castle Sforzesco in Milan and completed in 1564. Michelangelo had said he was done making the Pieta after the Deposition Pieta. Apparently he couldn't get this scene out of his mind. He worked on this piece even on the last day of his life, attempting to capture Christ's death and Mary's deep mourning.

When looking at this piece from certain angles, you can see Jesus bearing Mary's weight on his back. The love of Christ not only sacrificing his life to take the punishment for our sins, but also holding us up in our deepest sorrows.


So now you can see why these works of Michelangelo became the ideal topic of an Advent post.

One last though.It is said that Michelangelo did not feel he formed sculptures out of the rock, he felt he was releasing the piece hidden in the rock, merely chiseling away the rock to reveal what was there.

Blessings on your Advent season.


This post has been brought to you by the one word: Advent'sUltimateSacrifice


If you have questions or want to know more about Christ's ultimate sacrifice, please feel free to email me, maryveewriter@gmail.com