Set Aside The Crazy and Leap Into Advent

Set aside the crazy aspects that take place, you know what they are, and think of the heart meaning of Advent with me.

Breathe in deeply. Hold the air. Slowly release. Ready? This is a time of wonder and preparation. Dedicate your thoughts for what is about to come: The celebration of the birth of Christ the King.


For all the traveling I've done, I can't say I've set foot in every state from the extreme east coastal soil of the United States to the west coast. I've come close, though.

Another thing I have not done was preach the Gospel in every state I visited. I haven't even eluded to the saving grace of Jesus Christ. The gift of eternal life.

What brings all of this up?

Well, I heard an intriguing talk about the Apostle Paul this week. In Romans, Paul said the Gospel had been preached to the world. He had preached to the area from Illyricum to Jerusalem and had plans to head to Spain via Rome.


I had no clue where Illyricum was to grasp the amount of land he'd covered. I assumed the city was no longer was called Illyricum, but I had no idea what it was called today.

I had to look it up, too. Here is a map. The area that is now called Croatia is where Illyricum was located. 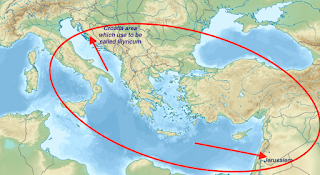 The land inside the red circle above covers a little more than the width of the continental United States.

Paul's mode of travel included sailing and walking. No trains, busses, cars, subways, or taxies. And sailing on the Mediterranean was not easy. Winds kicked up storms more powerful than many striking the oceans. Paul ended up ship wrecked more than once.

Still he pressed on with his task, all year long. In the blazing heat, freezing weather...all weather, teaching, discussing, and showing the men and women who lived in that space as wide as the continental United States there is a living God who loves them very much.

So much, this same one and only living God sent His Son Jesus Christ to live in our world for thirty-three years teaching, discussing, and showing us the ways of God. And when the right time came, God's Son, Jesus Christ, offered Himself as payment for all the sins..

Because He loves us.

And this Christmas, a time for gift giving, is the perfect time to share God's gift with someone who we know.

This post has been brought to you by the one word: Advent

If you have questions, please feel free to email me, maryveewriter@gmail.com

Loved the chance to pause, take a breath, and consider the Gift! Thanks, Mary. Merry Christmas!

Merry Christmas to you, too, Angie :)