There Were These Three Herons Walking Down The Road

There were these three herons walking down the road one day.

Oh, the chatter. Good grief. Like old men swapping stories exaggerating, and one-upping each other mostly about the biggest fish caught.

One said "I've been to Italy."

The Second said, "No way. Do you realize how far Italy is from here? You can't fly that far."

One said: Yes I can. See how sleepy my eyes look?

The Third one said: If you really went there, tell us what fish you ate.

One stood still, his eyes swaying to the side. "I had the nicest waiter bring a platter of shrimp and scampi. They were served in the shell and with the heads still on. So juicy. That was my first day. Well, you can see why I chose to stay for a few more days."

The Second said: "Were they served fresh?"

One: "I couldn't have plucked them from the water any fresher."

Third leaned closer: "What else did you eat?" 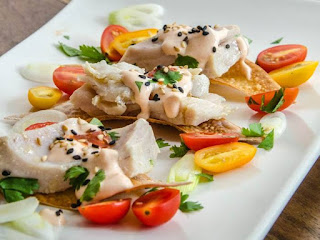 One bent his beak to his feathers and wiped drool: "Let's see, there was an Albacore tuna confit. "

Second: "Longfin tuna? I love that!"

One:  "I was treated like a Caesar. with a plate of rustic, roasted red mullet fillet, served on a bed of potatoes, fennel, olives, capers, and parsley. The right amount of salt, garlic, I can still taste it." 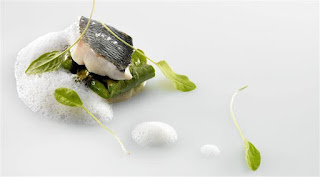 Third: You mean you were treated like a mob boss, right?

One: No. Sheesh. Then I had sea bass with celeriac puree, wild sorrel, and a smoked sauce.

One: Cut it out. It's suppose to look like sea foam. That's all right, I was the one who tasted the sweetness, the smokey clams in the sauce. Unbelievable."

One shouting at second who is running away: "Hey, where're you going?"

This post has been brought to you by the one word: GeezersInItaly

Mary: This is very interesting reading. We enjoy seafood and fish. When we took a trip to the Outer Banks (North Carolina,) we discovered Blue Fin Tuna. We only had it once but it was memorable. Blessings.