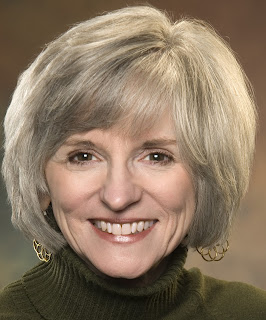 A commenter will win a copy of
Nancy's book:
Winner chooses one:


Mary here. This last March I sat in Nancy Rue's class at Mt. Hermon Writer's Conference. To say I learned reams would be to minimize what this amazing author communicated to us. I have known her as an author since my kids were small, and now I now her as a 3D godly woman. I asked Nancy, How has God led you on your writing journey? Here is what she said:

Just When You Think You're Done

When I’m asked, “How has God led you on your writing journey?” I have to answer, “How much time you got?” Because seriously, my 35-year career with its 125 books has ALL been God-connected. Okay, except for that one really awful novel I wrote before I was ready and that thankfully never saw the light of day …

How could it not have seemed like it was all ordained and anointed by God? I started my writing life just when Christian fiction was coming into its own. Publishers were scrambling for proposals and offering amazing advances and tapping their toes for the author’s next idea. By the time I went full-time into writing I was able to make a comfortable living at it, and oh, my, was it heady. I was getting emails and letters from grateful girl-readers and their moms and later from the adults I wrote for too. There were speaking events, gratifying responses to my three (count them) blogs and the belief that this blissful way of working and being was going to go on forever.

Yeah, had to be a God-thing.

That was probably why I didn’t become too concerned when the recession hit in 2007 and some of my fellow writers were having a tough time getting new contracts. Sure, I was seeing a decrease in advances but they were still healthy and I was still writing and reaching people and thinking if I continued to produce good quality stuff I could ride this temporary wave on into the future.

Was I blind? Naïve? Too egotistical for words?

Actually, I think it really was my belief that as long as I was doing what God called me to do I would be taken care of. The contracts and the advances and the royalty checks and my status as a Christian author would just be there.

The warning flags began to wave about four years ago, when I proposed a trilogy I was passionate about to my long-time publisher and was told, “This is just too Christian.” Mind you, those words came from the largest publisher of Bibles in the world …

Another of my publishers – in fact, more than one – said they loved me, loved my work, but my recent numbers just didn’t warrant a new offer. I wasn’t selling enough …

How to fix that? They said get more followers on Twitter. More likes on my Facebook page. More subscribers to my blogs. Do blog tours and Facebook parties and contests. Promote everybody else’s books so those authors would promote mine. Nobody was saying, “Write more books. Write even better books.” They were saying, “Sell more books.”

Of course. With that master’s degree in marketing that I didn’t have.

It all came home to roost in May of 2015. My last two books had just been launched with minimal fanfare (I didn’t throw a Facebook party for 2,000 people). Two recent proposals had gone all the way to the publication board and then been rejected because of disappointing sales numbers. I still had one out there, one I was aching to get my writing teeth into. But on that day in May, I received an email from the editor saying, “We would love to publish this, if you could just find a way to get more readers.”

I had a meltdown. The acute phase lasted for days. The chronic phase went on for several months. By the fall I was working on a novelization of a film, which kept me writing, but the career I’d loved for so many years had all but dried up and I was grieving.

So I decided to let it go. Release it. Actually, that wasn’t a choice I made out of the ether. In my journaling and praying and walking and all the other things I was doing with my new free time, I was nudged by God to come to this in January of 2016: I would expand the writers mentoring program I’d developed and enjoy working with my growing number of clients, and I would consider any writing that came along. No more trying to come up with proposals and trotting them around like a pathetic 64 year old still wearing high heels and getting face lifts. If a project came to me that had God written on it already, then so be it. If not, I truly could be okay with being done.

I was already planning a semi-retirement party for my 65th birthday when God made his move. A sudden influx of new clients. Invitations to speak and teach. Okay, I was right, then …

And a request to submit a proposal for a book series with a new publisher. One that didn’t care about the past sales numbers. One that wanted writers to write, not promote and market. One that said, in essence, “You’re not done.”

It has been the clearest leading from God that I’ve had since the day I sent my first short story to a Christian magazine in 1982. Not the part where I got the four-book contract and can now pursue a project I’m nuts about. The part where God said, “Release it all and see what happens.” I’m sure I would still be happy today if this opportunity hadn’t come along. It was the freedom to be authentic and refuse to jump through hoops I couldn’t believe in -- that was the God-thing. 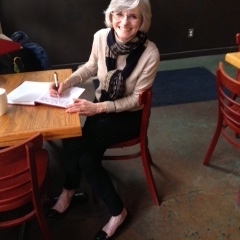 2016 marks Nancy Rue's 35th year as a published writer. In that time, she has become a best-selling author of books for ‘tweens, teens and adults. Over her career she’s written 125 books and has won two Christy Awards as well as the Women of Faith Novel of the Year distinction. Her recent tween girl trilogy, The Mean Girl Makeover, gave rise to the So Not Okay anti-bullying movement.
Nancy has expanded her offerings to include a mentoring program called From Shadow to Shelf for budding authors with dreams of their own. She travels North America speaking and teaching at writer's conferences and holding writing intensives.

She lives in Tennessee with her husband, Jim. Their daughter, Marijean, son-in-law, Brian, and five-year-old granddaughter Maeryn, live in nearby Nashville. The Rues’ yellow lab Geneveve and tabby cat King Arthur share Jim and Nancy’s home. Without them writing would be difficult.

Sorry I’m Not Sorry  Middle Grade story - tells the story of Kylie Steppe, former queen bee of Gold Country Middle School. After bullying a fellow GCMS student, Kylie has been expelled—and she has to attend mandatory counseling. Without her posse to aid her and other peers to torment, Kylie focuses on the person who stole her GVMS popularity crown: Tori Taylor. As Kylie plots revenge on Tori, she attends therapy sessions, where she reveals a few details that might explain why she finds power in preying on her middle school peers. After a rough year with bullying backfire, will Kylie decide to become more empathetic with her peers?
It's hard for tweens to imagine why a bully acts the way she does. Sorry I’m Not Sorry shows girls that they hold the power to stop bullying through mutual understanding and acts of love.

To Far to Say Not Enough - Adult story - Allison Chamberlain has done everything God required of her—but as He continues to nudge her in the third and final book of The Reluctant Prophet series, she is ready to say, “Enough!”

Even with two Sacrament Houses open, the Sisters’ second hand clothing boutique making its debut, and the orphaned Desmond legally adopted, Allison Chamberlain receives the divine Nudge to Go another mile. Eventually responding with her usual reluctant obedience, she finds herself caring for a very young prostitute and facing the deepest roots of evil. Despite the adversaries who threaten those closest to her, Allison finds that she has not gone far enough until she conquers hate and learns to love as God does. No matter what the consequences.

One Last Thing - New Adult story - Tara had always imagined her happily ever after. But her fiancé’s secrets are changing this story into one she doesn’t even recognize.

Enter the contest to win a copy of Nancy Rue's book:
(winner may choose of these books)
One Last Thing
Sorry I'm Not Sorry
Too Far to Say Not Far Enough
US only


Thank you, Nancy, for joining us this weekend!

Congratulations Nancy for your 35 year writing career and for writing what you believe in. May you enjoy many more years doing what you love.
Connie
cps1950(at)gmail(dot)com

Hi Connie!
I'm looking forward to Nancy enjoying many more years, too. She has so much to give in the story world!

From Lebrun Clifford: My girl read all her Lily books😊What a great journey she's on! Excited to see what comes from her next!

Once again, the computer changed the message, sorry. Nasty auto correct. The message is from Jebraun.

I am Anjola. I love your books so much. hopeolawumi2019@gmail.com I really like the books you write because it encourages and inspires girls to be themselves and know that God loves them every single day. My favorite series so far is the sophie series because she is like me in a way ,but she always finds a way to make me understand God love even more. I've read the entire book twice and i am planning on reading it again.