There Is A Man Named John 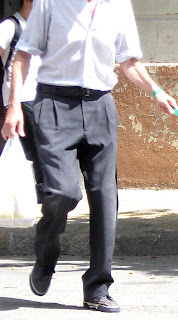 There is a man named John.

He is an older man. Gray hair. Happy wrinkles by his eyes.

He hadn't walked with the men who serve Sunday communion, not for the little more than two years I'd attended the church.

John was the last man in line as the group walked down the aisle, which gave him the center seat in the front row, on the left side. His gait was a bit wobbly, but his enthusiasm was contagious.

He sat at the same time as the other men, all donned in Sunday suits, and listened as the pastor spoke. At the correct moment, John struggled to stand. The man to his left grabbed hold of John's arm and helped.

The pastor handed each man a tray. He stopped when facing John, and whispered. From the look on Pastor's face, I assumed it was words of encouragement. John took the tray and waited for Pastor to sit.

When finished, the men walked back to the front of the church. John was the only one holding a tray. He kept pace with his wobbly gait. He handed the tray to Pastor and sat at the same moment as the other men.

The process was repeated with a second tray. Pastor whispered as he handed the heavier second tray to John. They gave manly nods and proceeded. John served Pastor and the people in his section then, when finished, walked to the front, the only one holding the heavier tray.

Sometimes being new, even two and a half years new, offers a unique vantage point.

John had something special. I saw it, but was unsure what it was.

Before ending the service, Pastor told us John had Parkinson's Disease. A year and a half ago John suffered a neurological disease that left him completely paralyzed for a month. His recovery suffered with the Parkinson's and the medications he had to take.

I immediately remembered photos of John shown in services from last year. Prayer was offered on his behalf weekly. John was confined to a hospital bed for a time, then a wheelchair. With every small step of progress the people in the church cheered, gave thanks to God, and prayed. I can't recall, but I think his chances of walking were not great.

And yet, here he was.

Walking with the other men and serving the people.

As men and women of faith, God tells us to pray. He wants us to talk to Him. Share our concerns, thoughts, hopes, and dreams.

As men and women of faith, God expects us to never give up. No matter what our circumstances.  I know...so many of you have really difficult situations. I am praying with you for God's mercies. Progress can be difficult to see especially when the need is so great. Sometimes we don't see progress outwardly, but know that God is soothing our heart.

Do you have a request we can pray for you?

This post was brought to you by the one word: Nevergiveup