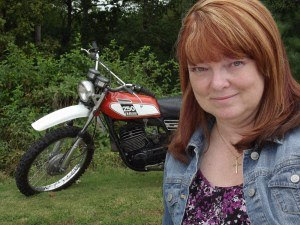 A commenter will win a copy of
Diana's book:


Mary here. Have you ever met someone for the firs time and immediately felt like best friends? I have, now....for the...let's see, fourth time.

Diana and I sat at a round table at the Mt. Hermon Conference. The more we spoke, the more we realized we were two different people who were living pretty much similar lives. THEN, I realized we also wrote the same style of stories for the same audience. AND she is a crazy adventurous person...check out her bike! Is she a twin sister I never knew before this year? I'm beyond happy to welcome Diana Sharpless today. I asked her, How has God led you on your writing journey? Here is what he said:

Riding the Storm Out

In a few weeks, my husband and I will take the first real vacation we’ve had in three years. We are planning to load camping gear onto our two Harleys and head up the Blue Ridge Parkway and Skyline Drive into Virginia, and then head down to the coast to ride along North Carolina’s Barrier Islands. It is a ride my husband has wanted to make since we purchased our motorcycles several years ago. In preparation, I have been looking at forecasts and making lists of the things we will have to pack for all possible weather scenarios. Afternoon thunder boomers that pop up in the summer in the south are something we should expect to face. Rain happens.

We’re preparing for storms. We may don rain gear and ride through a few. We may have to wait out a tempest or two. It’s part of the journey, part of the adventure. Yet unrelenting storms could also turn us away from our planned path and destination. We’ll have to accept that possibility too.

Psalm 107:23-28
Some went out on the sea in ships;
they were merchants on the mighty waters.
They saw the works of the Lord,
his wonderful deeds in the deep.
For he spoke and stirred up a tempest
that lifted high the waves.
They mounted up to the heavens and went down to the depths;
in their peril their courage melted away.

As I strolled the aisles at our local Walmart, looking for gear that would help keep us dry and safe, an old rock song infused itself into my thoughts: “Riding the Storm Out” by REO Speedwagon. Since another task for the day was writing this blog post, it occurred to me that over the years since I embarked upon my writing journey, I’ve gone through many storms. My chosen genre (young adult fiction) has gone through some doozies. Knowing in my heart that God had called me to write for teens, I put on my boots, huddled under my umbrella, lowered my shoulder against the wind, and kept going.

I remember the tough critiques and the how-to books and the classes promising to make my writing stronger … if I was willing to put in the time and not let the dark clouds turn my eyes toward easier tasks.

I remember attending conferences and approaching agents and editors, armed with carefully prepared one-sheets and proposals, so hopeful that these people would welcome my submissions upon hearing my enthusiastic pitch … only to be told that young adult fiction wasn’t selling and no one was looking for it.

I remember watching my writer friends succeed—getting published and winning awards—while I still slogged through muddy water burdened with politely worded rejections. Not yet. Not yet.

Psalm 107:28-29
Then they cried out to the Lord in their trouble,
and he brought them out of their distress.
He stilled the storm to a whisper;
the waves of the sea were hushed.  NIV

So many storms. Years and years of them. Yet I knew I couldn’t turn away. My love for teens and the stories I wanted to give them was too deep. And I knew I wasn’t alone. In the moments when my courage flagged, something always happened to remind me that the Lord put me on this path for a reason. Whether it was finally receiving awards for my work or something as simple as meeting a young man in a book store who, waving his hands at the shelves so devoid of fiction, cried, “There’s nothing here for me to read!” … the Lord was faithful and present and gentle in His reminder that my time and effort would not be wasted. I might not perceive the journey’s end ahead, but the storm was His to command.

Luke 8:22-24
One day Jesus said to his disciples, “Let us go over to the other side of the lake.”
So they got into a boat and set out.
As they sailed, he fell asleep. A squall came down on the lake,
so that the boat was being swamped, and they were in great danger.
The disciples went and woke him, saying, “Master, Master, we’re going to drown!”
He got up and rebuked the wind and the raging waters;
the storm subsided, and all was calm. “Where is your faith?” he asked his disciples.
In fear and amazement they asked one another,
“Who is this? He commands even the winds and the water, and they obey him.” NIV

I thought I had reached the destination when the first publishing contract came in, and when at last a book with my name on it sat on the book store shelves. I thought I was reaping my reward for years of dedicated hard work, and it would get easier from that point on. I was wrong. The market changed again. Another rejection came. A few bad reviews on Goodreads seemed to shout louder than all the good ones. Agents came and went. And then a storm I could not have anticipated came: a cancer diagnosis.

So many times I wondered if that one published book was all I would see, and if maybe the Lord was directing my path somewhere else. Or if I had failed Him somehow and He was taking it all away. I knew I would survive the cancer. We had caught it early and dealt with it in a no-nonsense way. I didn’t know, though, if my writing career would survive. Days came where my brain was in a fog from the life-saving chemicals and I was too tired or sick to even think about putting my fingers on my computer keyboard. But I remembered the Lord’s faithfulness all the other times He brought me through a storm. I kept working. It took over a year, but I wrote and edited the sequel to Running Lean. I held to the promise, even when it looked bleak. When my chemo treatments were finished, I put on a wig and attended a conference, where I pitched the book and received not one, but six invitations from editors and agents.

As I write this, I’m still waiting to hear back from the publisher of Running Lean as to whether they want the sequel, but I’ve signed with a new agent, and I’m researching and writing a new novel. I’m moving on, knowing that the journey isn’t over yet. And I am strong enough now to ride my motorcycle up into the mountains … because of God’s faithfulness. I fully anticipate there will be more storms ahead. I know I won’t be facing them alone. And each one will make me stronger.

Isaiah 54:10
Though the mountains be shaken
and the hills be removed,
yet my unfailing love for you will not be shaken
nor my covenant of peace be removed,”
says the Lord, who has compassion on you. NIV 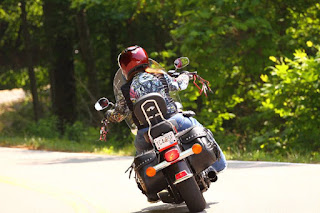 Diana Sharples lives in north Georgia with her husband and daughter, and a house full of rescued pets. She wrote her first teen novel at the age of thirteen. Although she holds a degree in communication design/illustration from the Atlanta College of Art and won awards for her work in science fiction and fantasy illustration, she never lost her love for storytelling. In addition to infusing her artwork with narrative, she wrote several epic-length fantasy novels. As her daughter was entering her teen years, Diana refocused her writing efforts on contemporary young adult fiction, and, in time, she won pre-publication awards in that genre as well. Her debut novel, Running Lean, was released from Zondervan Books (a division of Harper Collins) in 2013, and she is currently working on the sequel and another series of stories with elements of mystery. Diana is also a motorcycle enthusiast and can often be found riding her Harley around the foothills of the Appalachian Mountains. 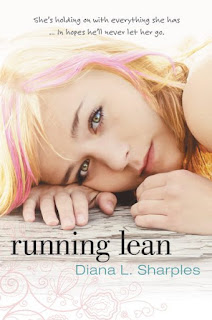 
Equilibrium. That’s what Stacey and Calvin found in each other. He is as solid as his beloved vintage motorcycle and helps quiet the constant clamor in Stacey’s mind. She is a passionate, creative spirit—and a lifeline after Calvin’s soldier brother dies.

But lately the balance is off. Calvin’s grief is taking new forms. Voices of self-loathing are dominating Stacey’s life. When struggles with body image threaten her health, Calvin can’t bear to lose another person that he loves. Taking action may destroy their relationship, but the alternative could be much more costly.

Enter the contest to win a copy of Diana Sharples book:
Running Lean
US readers invited to enter!!


Thank you, Diana, for joining us this weekend!

Mary, I absolutely loved this interview with Diana and I am so glad she is your friend! Diana, I admire that you have your own Harley and that you actually ride it. Lol. I am not that brave! I regret that you have dealt with cancer but it is clear that your faith has been strengthed. I hope that your sequel will soon be available and I wish you a wonderful vacation, a healthy future and many more stories to share with all of us. Thanks also for sharing some of your favorite scripture.
Blessings to you and Mary!
Connie
cps1950(at)gmail (dot)com

Connie,
Thanks for stopping by.
Diana's adventure has been so intriguing to read. I'm excited to see what God has for her in the future.

Thanks, Connie! Riding motorcycles is a bonding experience for me and my husband, even though we're riding separate bikes. It's a feeling of freedom ... and a great way to clear my thoughts and even pray. I hope to have news soon about the sequel and the other projects I'm working on. Blessings to you!