The fun part about living in America is seeing a conglomeration of holiday traditions.

Haven't you visited someone's home and found a bit of different take on the celebration?


The fun part is seeing a great idea at a Christmas party, in a magazine, Pinterest, or other social media, tweaking it, then finding a way to add it to your own.


Everything we use or do doesn't have to be from the same country, heritage, or culture. After all, we put up a German tree in our living rooms, sing songs in various languages-- some originally written in Latin, and combine all these great ideas into our own celebration of Jesus' birth.

Today, I've asked my chefy daughter--the one who is in culinary arts school and will be going to Germany to continue her studies next May, to help me with today's post. We are presenting some Eastern European table settings ideas. Feel free to ooooo, ahhhhh, and add to your celebration this year. 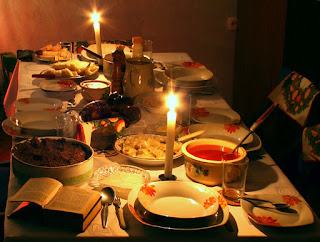 My children learned to celebrate Christmas Eve the Lithuanian way. Whether we had a chance to Grandma and Grandpa's or stayed at home, we followed the Lithuanian custom of having the large family Christmas dinner on Christmas Eve. I think these memories are what spurred my chefy daughter to explore other Eastern European customs.

#1. Children watch for the first star of the night to poke through the dark sky. This star symbolizes the star of Bethlehem. Of course they run and play games in their winter coats until the first one notices the light in the sky and shouts "First Star!" The boys and girls all look at the twinkle in the sky, then run inside, set their winter clothing aside, and sit at the dining room table.


(My kids would have tossed their jackets on the floor then pouted when I reminded them to go back and hang them up ;) )


#2. In Slavic homes, hay or straw is placed on the table during Advent meals to represent the nativity. My chefy daughter went out to our field, found some hay, brought it in the house and tied a ribbon around the small bundle. She set it aside to dry before placing it on the tablecloth for her demonstration at school.


#3. In Poland, an extra place is set during the Christmas Eve meal. In chefy daughter's research she learned this was done for one of two reasons:

*An extra setting is left symbolically for the Christ Child. This is a meal honoring the birth of the Christ child. Jesus is with us. So a place is set for Jesus.

*Or an extra setting is left for any unexpected guests. This is a symbol to remind us Mary and Joseph had no place to go, were turned away from the inns in Bethlehem, and were forced to bed in a stable on Christmas Eve.


These are three great ideas!

My family has Christmas dinner on Christmas day. But I think I would like to work in the star sighting the night before.

I also like the bundle of hay on the table. What a great way to remind us of the nativity.

The extra place setting idea seems like a good one, too. I'd talk this over with my family to see which of the two reasons they'd want to focus on.

How about you?
Do you know of a European tradition used at Christmas/Advent time?

This post has been brought to you by the one word: ChristmasTraditions

You and your daughter have such a great relationship. It's great to hear about how she is involved with family traditions. I loved hearing about the tradition of using the hay. So simple yet so complete! I don't know of any traditions from Europe except for the German tabletop trees.

Thanks, Janice. She has learned a lot at culinary arts school. I'd be a fool not to learn from her!! And Christmas is the biggest holiday celebrated in our house. Even bigger than Thanksgiving. Music playing all day...love the sounds. Chefy daughter took it upon herself to remind Dad to set up the music for the season. Awesome, eh?

I really like #2. Since we have cattle, we have plenty of hay, so I will be adding it to our traditions this year. I'm not sure where it originated, but there is a legend that on Christmas Eve, animals are given the power to speak, in honor of the animals who shared their stable with the newborn Jesus. Some countries have a tradition of visiting the barn late at night to try and hear them.

Fascinating. I love hearing about traditions people follow. Thanks, Mary!

Oh, wow, Kim. Those are fabulous ideas!! And if someone doesn't have a barn then maybe a child in the midst could draw a picture of a barn. Oooo that sounds good, too.

Thanks so much for sharing!

You're welcome, Angie.
Next week, I've asked chefy daughter to do a duet blog with me again. We'll talk about interesting foods.