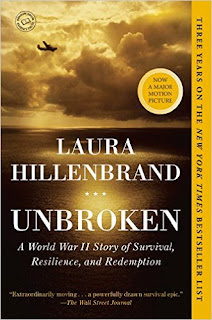 When the movie "Unbroken" came out in the theaters ,I heard great reviews. I went and saw the movie and was equally impressed.

I had heard that the man in this story, Louis Zamperini, had come to know Christ. I didn't see anything about this in the movie. What I saw instead was Louis's strength to endure starvation, beatings, hard labor, sun exposure, isolation, lies, demeaning words, sleep deprivation, and much more.

I read the book and learned so much more. The best part had been left out.

So many other men in the same situation did not survive.

The few men whose bodies endured to the end of the war and returned home suffered post traumatic syndrome disorder. Nightmares, voices, sudden sounds...all tormenting their minds and drawing the survivors back to the prison camps.

Louis struggled with the same problems. He lashed out at his wife and others around him. His body and mind had been broken and he didn't know what to do.

One day Billy Graham held a rally in his town.

Louis sat in the arena. Billy Graham's words zipped in and out of his head. It wasn't until Billy mentioned suffering and God's understanding of the sacrifice that Louis really heard Billy's words. Billy went on to present the Gospel to thousands of listening men and women, including Louis.

That night, Louis asked Jesus into his heart.

Before reading the book, I had reflected on the movie many times. I wondered how Louis managed to survive the torment of one particular Japanese officer, how he survived so many days on a raft with no food or water, how he found the courage to return to Japan and carry the Olympic torch years later.

Days after finishing the book it occurred to me that God had helped him survive.

Like Elijah worn, weary, and hungry, God sent an angel to nurse Elijah to health.
Like Paul, God healed him from the venomous snake bite to continue the missionary work.

Like so many others whom God helped live longer to complete the task. God knew Louis would ask Jesus into his heart that day in the arena. He knew Billy's words would touch Louis's heart. He knew Louis's wife would invite him to go.

God knew. And He gave Louis the strength to survive until that day.

God knows what job lays ahead for us. Who we'll impact. What we will do. He will help us accomplish whatever we've been called to do like He did Moses.

God loves you and has some really awesome plans for you. This does not mean that life will be sweet, good, or full of cheer. It might be. It might not be. Either way God will always love you and insure you will have the opportunity to do that special task.

I'd like to invite you to sign up for my free newsletter in the right column. Those who sign up will receive my Christmas story, 14 Mornings ’Till Christmas in December.
Posted by Mary Vee Writer at 10:30 PM

As always, Mary, your posts are fascinating and give me insights I would not have had otherwise.
Blessings to you and your family for a wonderful Thanksgiving from the grocery shopping, through the chopping, and on to the chomping, may it all be delightful. And I know many thanks will go up to God for it all.

Thanks, Janice. :) I need to make a salad for 15 for tomorrow's Harvest event. Any ideas?

I never saw the movie "Unbroken", but can't imagine how they made a movie about this man without the part of him becoming a Christian. Without that part of the story, the movie must have been about how wonderful this man was. That's totally missing the point. I'm thinking that Louis would not like his life portrayed at all without giving the Lord credit for what happened to him..