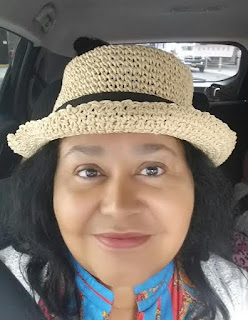 One commenter will win an copy of
Belle's eBook:

Till the End of Time

Scroll down to see how.
International Readers invited to enter!


Mary here. I'm so happy Belle is visiting with us this weekend. I asked Belle to tell us how God led her on her writing journey. Her words are really touching. Here is what she said:

Joyful Moments For Those Going Through Rough Times

As the kid who grew up across the street from a public library, I have always been fascinated by books. I had childhood favorites such as Nancy Drew, Little Women and Rebecca. I was known to constantly have my nose buried in a book.

Throughout my childhood and adolescence I was fortunate to live in a faith-based household.  I enjoyed a wonderful relationship with the Lord and always drew on Him for strength.

My faith journey as a writer has taken me through some twists and turns. As an aspiring writer I was dealt a devastating blow when my mother was diagnosed with terminal cancer back in 2000. It was a bitter pill to swallow to know that although she’d never smoked a day in her life, she had lung cancer. The question of “Why her?” was a constant in my mind.

Having always enjoyed a wonderful relationship with God, I found myself so angry about her death that I shut Him out. I didn’t want to write or explore a career as an author because I was grieving and hurt by the storms of life. It wasn’t until it hit me that I hadn’t always thanked God for the blessings that I realized I couldn’t be angry at Him for the hardships. Life is a mix of things…the good, the bad, the sour and the sweet. God’s love for us never changes. The hardships will come. But leaning on the Lord during these times makes us stronger.

Back in 2012 I was fortunate to stumble across an opportunity to pitch a story in an online contest with Harlequin Love Inspired editor, Emily Rodmell. I had an inspiration to write a story about a woman who had left her Texas hometown after being the driver in an accident that had paralyzed her best friend. The heroine, Cassidy, had also jilted her fiancé, Tate, when she packed up and left.

In writing this story I wanted to create a heroine who had done something that she couldn’t fix with the snap of a finger. I wanted to show the character’s remorse and her journey toward redemption. To my everlasting delight, Emily bought the book which hit the shelves nine months later.

By leaping out on a leap of faith and entering the pitch contest, I had changed my life forever.  And there is no doubt in my mind that God led me down that road. He showed me the way to reach for my dreams.

Writing inspirational romance novels is extremely rewarding. I love hearing from readers. It is extremely gratifying to hear how my books have impacted people’s lives. Readers have shared their hearts and souls with me.

After writing a paralyzed heroine, I heard from a reader who is paralyzed herself. When she told me she had never found the type of love that my heroine found, and that she was able to live vicariously through her, I shed tears. I’ve heard from readers who’ve lost children, who’ve buried husbands or been blindsided by divorce and cancer. I have no doubt in my mind that God led me to writing inspirational romance so that I could provide joyful moments for people who are going through rough times. It is an honor to be able to give readers pleasure through my stories and characters. I truly believe that everyone has a gift in this world and it’s our responsibility to find out what that gift is and then share it with the world.

“Let your light so shine before men, that they may see your good works, and glorify your Father which is in heaven.” Matthew 5:16 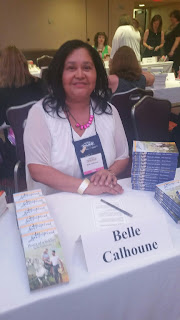 Belle Calhoune grew up in a small town in Massachusetts as one of five children.  Although both her parents worked in the medical field, Belle never considered science as the pathway to her future.  She began to gravitate toward romance books in her tween years.  Growing up across the street from a public library was a huge influence on her life.  Married to her college sweetheart, she is raising two lovely daughters in Connecticut.  A dog lover, she has one mini poodle and a chocolate lab.   Writing for a living is a dream come true.  Working at home in her pajamas is one of the best perks of the job.  Belle enjoys summers in Cape Cod, traveling and reading.  A lover of all things French, Belle often dreams of her next Parisian adventure.  Belle is the author of five Love Inspired romance novels and the popular Christian romance series, Seven Brides, Seven Brothers


Belle loves to connect with readers. You can find Belle at:    Facebook|Twitter
Website 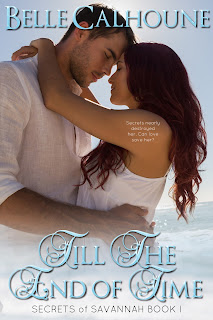 Callie Duvall was raised in the lap of luxury in Savannah, Georgia after being adopted by the Duvall family at the age of five. When she discovers that her biological brother, Mac Donahue, is alive and well, despite having been told as a child that he was deceased, Callie realizes her life as a Duvall has been built on a foundation of lies. Seeking to distance herself from her father and his deception, Callie moves to the guesthouse of Savannah House, the famous resort where she worked summers as a teenager. On the brink of a whole new life, Callie begins spending time with her childhood friend, Jax Holden. Jax is funny, tender and sweet. But Callie isn’t sure she can deal with her growing feelings for him. Life has taught her that love is a dangerous emotion and she can’t help but fear that falling for Jax will make her world unravel.

Businessman Jax Holden has been in love with his childhood friend, Callie Duvall, for as long as he can remember. For many years, Callie has viewed Jax as nothing more than a thorn in her side. Now, he’s determined to win the love of the one woman who owns him heart and soul. As the two begin a relationship, Jax begins to feel Callie thaw toward him. But when Jax’s employment with Duvall Investments, the company Callie’s father owns, places him at odds with Callie, he’ll have to fight to win Callie’s love. Can Jax convince Callie to give their love the chance it deserves?

here is how:
leave a comment (and email address)

Thank you, Belle, for joining us this weekend!

We enjoy chatting with you and are looking forward to reading your comments and questions. Or at least your hi, hello, or hey.

Email ThisBlogThis!Share to TwitterShare to FacebookShare to Pinterest
Labels: Belle Calhoune, Let's Talk, Mary Vee, Till The End of Time

I wish I had lived so close to a library.

I love stories about forgiveness. I spent a lot of time at the library as a child as well. I also loved Nancy Drew, still do actually. l(dot) bergh (at) sbcglobal(dot) net

I totally agree with you, Mary.
I've read several kids books, even Newberry winners, that have characters walking to a library or spending a large amount of time in the library. Those were places and people I wanted to be. The library takes us to amazing lands. Sigh. I think I should have been a librarian :)
Great chatting with you, Mary.

Morning, Laurie, great to see you today. Thank God He is the great forgiver, right? He loves us that much.
I'm so glad you stopped by to chat with Belle and me today. I hope you have an awesome day.

When I was younger I lived far away from a library as I got older I started living closer to the library. Library are a great place to read books and check them out also.

I believe forgiveness is the hardest thing we will ever try to do and we just cannot do it without the help of God. When I was young I loved the Library and was an avid reader of Grace Livingston Hill and Janette Oke. spotts06 at comcast dot net

Thank you Mary for another interview and giveaway.

I totally agree, Kim. My current house is 30 minutes drive from the nearest library. Sad. BUT the good news is, when we lose power, I can go to that library to do my chatting with you all:) See? Of late I've been downloading books on my phone from the library. Unfortunately I can't download the scent of the pages and the other pluses to holding a real live book.

Sure hope you're having a great day. Belle and I loved chatting with you.

So true, Stella. Doesn't it seem that the evil one works extra hard to keep us from forgiving? The issues mount, we become more offended, yeah...definitely can't do the job justice without God's help.
I'm wondering who from our group today worked in a library in any capacity. Did you? I would have liked to.

You are so very welcome Ann. I always love your visits and this time I had the privilege to introduce you to Belle. A win--win. :)

Hi Mary. It was really lovely. It certainly fueled my love of the written word. I remember roaming the aisles and feeling so lucky to be surrounded by so many books. Blessings. Belle

Hi Laurie. It's really funny how the theme of forgiveness tends to trail after me. I think at my core I know that it is one of the most important gifts we can another human being. And it is difficult at times...but so very worthwhile. I still love Nancy Drew and thankfully so does my 13 year old. Blessings. Belle

Hi Kim. To this day I visit the library at least twice a week. And I get a giddy feeling when I'm there. I will love libraries for all of my life. Such treasures reside inside them. I am fortunate to have four libraries in my town. Blessings, Belle

Hi Stella. I totally agree with you. It is really difficult especially when there has been pain and distance and hurts. In order to walk the path of forgiveness we really have to push our pain and pride to the side and embrace what God wants us to do...love one another. Blessings, Belle

Thanks for stopping by Ann. It's my pleasure to do the giveaway. And thanks for hosting me Mary.

Belle is a new author to me. Her books sound like great ones to read. I love reading the interviews! Thanks for another giveaway. Donna d(dot|)brookmyer(at)yahoo(dot)com I already subscribe to your newsletter.

Hi! Hope you get to check out one of my books. It's my pleasure to be guesting on this wonderful blog. Blessings. Belle

Hi Donna,
So happy you made it to our chat today. Belle just seems to be one of those authors we can sit down and have a long chat with while enjoying pastries and coffee or tea, don't you think?