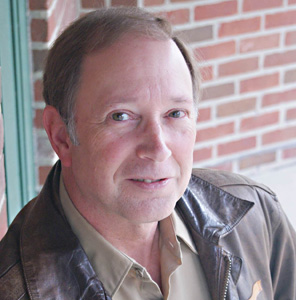 One commenter will win a copy of
Rick's book:


Mary here. I first met Rick Barry at a writer's conference in Chicago several years ago. He read his short story to our critique group. I knew then that any book he would have published would be better than fantastic. I was intrigued. I was spellbound. His story was unique and amazing. When I heard his first book was due to be released--update: The Methuselah Project just hit store shelves, I asked him to come visit us. I asked Rick to share how God had lead him on his writing journey. This is what he said:

Hi Mary, and all the friends visiting your blog!

You asked me to share my writer’s journey. I can honestly say that this journey consists of many mistakes and many rejections. But let’s start at the beginning—as a reader.

In grade school I enjoyed different types of stories in each grade. In third grade I wanted only Western/Native American stories. In fourth grade I lived for underwater SCUBA adventures. By fifth grade I grew to love The Hardy Boys. By sixth grade I graduated to sci-fi and outer space.

However, it was in fifth grade that I seriously considered writing a genuine story of my own. Dublin Elementary in Union Lake, Michigan, encouraged kids to enter the Young Authors Contest.  All the kids in my class were doing it. (I don’t believe Mrs. Monetta gave us an option!) The Apollo program was in full swing, so I crafted a little tale about three astronauts in a Saturn V rocket. My little book with its aluminum-foil cover finished first in fifth grade. The next step was a regional competition, where some other budding writer knocked me out of the running. What a disappointment…

Before long, I was itching to try a harder story. A whole book. Maybe a mystery similar to the Hardy Boys? With great confidence I sat at Dad’s desk with a ream of paper. I concocted names for two boys and wrote Paragraph #1. It was magnificent! In white-hot creativity, I printed Paragraph #2! Suddenly my No. 2 pencil screeched to a halt. I had no idea what should happen next. Not even a glimmer of mystery to solve.

“I guess I’m not really a writer after all,” I concluded. To hide my failure, I wadded up that sheet of paper and buried it in the bottom of the waste can.

Fast forward to my sophomore year in college. Spring break arrived, and I noticed an ad for a writing contest in a Christian magazine. For fun, I penned an article and mailed it in. No, I didn’t win, but the editor offered to buy my article anyway. When the magazine came out with my byline, I could hardly believe it. My own name in a magazine. I was published!

My appetite whetted, I began writing and submitting more articles. Often only rejection slips arrived. But checks also came back, which spurred me on. Never realizing I should specialize in just one type of writing, I tackled every interesting idea that popped into my head: non-fiction articles, Christian devotionals for adults, short fiction for adults, and even short fiction for teens and middle-graders. (To this day I create unusual fiction for Focus on the Family’s Clubhouse magazine for kids.) 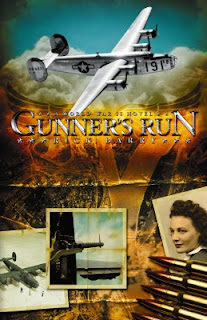 Still, I recalled that my fifth-grade self had failed at novels. Dare I try again? Tolkien is a literary hero, so I created a fantasy world and developed a tale called Kiriath’s Quest, which is still in print. Being a World War 2 buff, next I contemplated a story about an American airman trapped alone behind German lines. That inspiration developed into Gunner’s Run, which has been amazingly popular for a wide range of ages from 12 to an 89-year-old veteran who assumed I must be his age if I know about all the things he remembered!

For my latest novel, The Methuselah Project, I yearned to try something unique. So, I blended history (a WW2 fighter pilot named Roger Greene), suspense (he gets captured and must escape), a light sprinkle of sci-fi (German scientists use him as a guinea pig in a secret experiment), plus romance (Katherine Mueller helps Roger without realizing what’s happened to him), then wrapped it all in a Christian worldview.

The resulting adventure was definitely different for Christian publishing, but I personally loved it. Better, Literary agent Linda Glaz loved it too. She offered representation and began shopping it to publishers. Kregel in Grand Rapids caught the vision for Roger Greene’s story and wrote up a contract.

The Methuselah Project released two weeks ago, a full month ahead of schedule. Yet, I praise the Lord for 5-star reviews that are already popping onto Amazon. No book appeals to everyone, yet readers are already asking, “Will there be a sequel?” Praise God!

Speaking of the Lord, let me finish by saying that what began as a whim, then became a hobby, is now a ministry. I’m convinced God has given me a spirit of creativity, and He means for me to glorify Him with that gift. For Christian authors, writing can be a literal act of worship—an act in which we take talent God has given us, use it to design a literary creation, and then return it to Him for His glory. Amen. 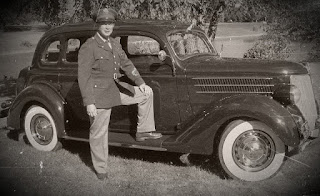 Rick Barry is the author of Gunner's Run, another World War II novel, Kiriath's Quest, and over 200 articles and fiction stories. He holds a degree in foreign languages, speaks Russian, and visits Eastern Europe every summer to assist in Christian camps for children and teens. Rick and his wife Pam have two grown children and three lively grandsons. They live near Indianapolis. 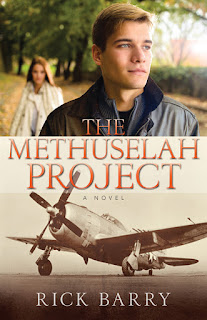 Shot down over Nazi Germany in 1943, Roger Greene becomes both a prisoner and an unwilling guinea pig in a bizarre experiment. Seventy years later, Roger still appears as youthful as the day he crash-landed—and he’s still a prisoner. Nearly insane from his long captivity, Roger finds his only hope in an old Bible.

Not until our present time does Roger finally escape from the secret society running the Methuselah Project. When he does, the modern world has become a fast-paced, perplexing place. His only option is to accept the help of Katherine Mueller—crack shot, go-getter, and attractive to boot. Can he convince her of the truth of his crazy story? And can he continue to trust her when he finds out she works for the very organization he’s trying to flee?

Enter the contest to win a copy of
Rick's book:
The Methuselah Project
here is how:

if you aren't already

Thank you, Rick, for joining us this weekend!

We enjoy chatting with you and are looking forward to reading your comments and questions. Or at least your hi, hello, or hey.

How has a childhood dream come true for you?

This book sounds super interesting. I can't wait to read more about the bizarre experiment and all. l.bergh@sbcglobal.net

Thanks for dropping by, Laurie! If you pick up The Methuselah Project, I hope you enjoy it!

It definitely is, Laurie. Plan to stay up late. Rick's story is so intriguing, you won't want to put the book down until you're done..AND THEN you'll want to pass it along to a family member. Yep. This is a good book.

Hm, this sounds pretty awesome! It's a very intriguing plot; I'd love to read it!! mdp94 (at) bellsouth (dot) net

Hi Morgan!
This will be a great read. Definitely one to add to your nightstand. I'm so glad you stopped by to chat today!

My childhood dream was to be a missionary. God dropped the right man at my college to take me into this dream. Thank you God for your kindness!!
Mary, Victory Baptist Academy thanks you for your kindness in coming to our school to give excellent writer's lessons to every grade available. Your lessons were very well received with enticing kit kats to help us remember!!

My childhood dream was to be a missionary. God dropped the right man at my college to take me into this dream. Thank you God for your kindness!!
Mary, Victory Baptist Academy thanks you for your kindness in coming to our school to give excellent writer's lessons to every grade available. Your lessons were very well received with enticing kit kats to help us remember!!

And for the older students, Rick's book, The Methuselah Project, made a great "how to write the perfect middle of a book" example. It was all in God's timing. Pretty awesome.

Mary, I'm honored and pleased that you chose The Methuselah Project as an example in your recent writing class. Out of the many thousands of published books, you chose mine? I'm still amazed, but grateful! Blessings to you.

Yep. I needed one that got the job done in a way that would yank in those teens. The Methuselah Project did the job. Oh, yeah. :)