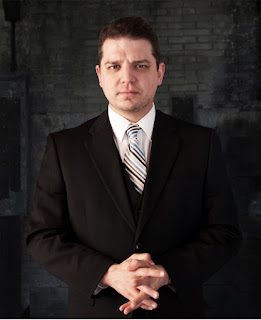 One commenter will win a copy of
Zachary's book:
The Last Con


Mary here. I recently learned Zach is a pastor of a church only an hour's drive from my city. Small world! A couple of weeks ago I went to the Great Lakes ACFW meeting and was happy to see my friend, Ann Byle. Ann happened to be one of the speakers. During her talk she mentioned Zachary Bartels, saying, "His book is absolutely amazing. Fast pace. Filled with action." I raised my hand and said, he is going to be a guest on my blog!. I later found out that she is also Zachary's agent and is very excited about Zachary's next book. I asked Zachary to tell us how God has lead his writing journey. What he said will inspire you no matter what your career is:


Two Sides of the Same Coin

When I see God at work in my life, he seems to use an awful lot of Judo moves.

Wait. Let me back up.

My sermon podcast on iTunes is available in Kenya right now, but not in the United States. I’m not sure why. Wait. Let me back up some more.

I only know about the iTunes thing because a couple of my readers told me. You see, back when I was putting together our website, about ten years ago (shameless plug: http://www.churchlansing.com/ ), I looked at some other church's sites and stole my favorite elements of each one, including the audio sermons being available on iTunes (even though I highly doubted that my congregation was chomping at the bit for an iTunes channel).

For a decade, my weekly messages have been multiplying out there on the interwebs, being downloaded at a decent pace—I assume, by a combination of parishioners, friends, and googlers. (And for some reason, a whole bunch of people accessing them every Saturday night, especially after 9:00 . . . not sure what that's all about, but it's definitely not procrastinating pastors desperately searching for eleventh hour sermon material, amiright?) But only since my debut novel Playing Saint came out have these online sermons helped create relationships with believers from all over the world and led to some great conversations.

I didn't see that coming.

As I was querying agents, then shopping my first manuscript, then preparing to market the book, whenever my church or my preaching came up, it was in terms of, How big is your congregation? Does it provide a significant platform for your writing? Are you a big enough "name" in your circles that people will be lining up to buy your book sight-unseen? Full disclosure, the answers to those questions are: about 120 members, nope, and absolutely not. Thankfully, Thomas Nelson was willing to sign me up for a two-book deal even without a megachurch or celebrity preacher status.

But then this reversal happened. (Which I call a “Judo move,” because Judo involves using someone's momentum to flip them over): my writing began to give my pastoral ministry a further reach. Playing Saint explores the question of what the Gospel truly is and the tension between faithfulness to the Gospel and chasing the world's idea of success. My new book The Last Con deals with questions of identity and which me is the real me when I find two versions of myself at war within. I've been pleased to find that these themes have resonated with readers and to hear from people whose understanding of the Scripture and of themselves has deepened because of these books.

And I've been even more excited to hear from Christians who have not yet found a church home in their area and from joggers who want to tone their body and soul simultaneously, who are now downloading my messages after connecting with my books. When some of these readers have asked for pastoral advice, prayer, and help with a difficult teaching or issue, well that's just icing on the cake. (Disclaimer: you need a local church and local pastor too.) My “pastor platform” may not have supercharged my book sales, but my “author platform” is giving me great opportunities for additional ministry.

But this was a judo combination--an even stranger reversal followed. Let me back up one more time.

A big temptation in ministry is for pastors/ evangelists/ teachers/ missionaries to give themselves credit for what God is doing. In the Bible, this sort of thing leads one king to go nuts and turn into some sort of beast/eagle-man for a time, and another (less fortunate) king to be eaten by worms and die (in that order). I’ve never seen that, but it’s still a dangerous habit today. When one starts down that road, it all too often leads to a place where the people we minister to become numbers, “giving units,” perspective customers, or some kind of fan base. Of course this is completely upside-down when we consider that Jesus taught us (in another one of his spectacular reversals) that "the greatest in the Kingdom of God is the servant of all."

For that reason, I found myself a little weirded out by the prospect of trying to build my Twitter following, promote my product, get my name out there as much as possible, and all the other stuff that goes along with marketing and promoting books as an author. There's nothing wrong with that stuff, of course; it just rubbed me the wrong way because of my background in ministry. But when I began to see the writing not as an escape from ministry, but as an aspect of ministry, I suddenly found some major freedom from all the internally and externally applied pressure.

Not that I don't care how many people buy my books. I do! If people aren't reading what I write, it can't challenge, encourage, bless, or convict them. There's also the fact that a publisher made an investment in me and I'd like that investment to see high returns. And, for the record, I want you to follow me (see the links below).

But the Judo move that God used to leave me temporarily slack-jawed on my back was the one that showed me an important truth: being a pastor and being a writer aren't two equal-but-opposite callings, one in which self-promotion is sinful, and the other in which it's a virtue or, at worst, a necessary evil. They’re actually two sides of the same coin. And both are to give all the glory to God, leaving none for me.

St. Paul (and the Holy Spirit) tells us in I Corinthians 10:31 “. . . .whatever you do, do it all to the glory of God.” If I owned a lawn sprinkler company or a pet grooming studio, I’m pretty sure I'd be promoting those in a variety of ways, and without the sense of guilt. But as a disciple of Jesus, I'd ultimately be bringing glory to Him, not myself—that is, if I worked “as working for the Lord, not for men” (Col 3:23-24), and I'd be viewing every customer, not as a bunch of walking dollar signs or steps on a latter to the top of my industry, but as precious people made in God's image who should be served. And regardless of how many poodles I’d sheered, sprinklers I’d installed, books I’d written, or sermons I’d preached, if I wanted to be the greatest where it really matters, I'd better be happy to serve them.

After all, in this Kingdom, the first is last, the greatest is the servant of all, and being thrown to the mat in a massive judo move can be just the blessing you need. 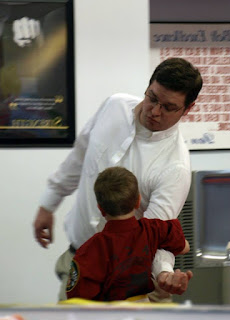 Called “the suspense author everyone is talking about” by Family Fiction Edge magazine, Zachary Bartels is the author of critically acclaimed supernatural thrillers. An award-winning preacher and Bible teacher, Zachary has been serving as pastor of Judson Baptist Church in Lansing, Michigan, for ten years. He enjoys film, fine cigars, stimulating conversation, gourmet coffee, reading, writing, and cycling.

His debut novel, Playing Saint, has been called an “intrigue-filled thriller” (Library Journal) and “a page-turner from the very beginning . . . gripping and realistic” (RT Book Reviews). His newest book, The Last Con (HarperCollins Christian Fiction, 2015) has met early positive reviews. He lives in the capital city of a mitten-shaped Midwestern state with his wife Erin and their son.

Former con man Fletcher Doyle is finally home after six years in prison. He’s working hard to restore his relationship with his wife and twelve-year-old daughter, but it’s slow going. He hopes that the upcoming mission trip into Detroit will allow him to demonstrate his newfound faith and honorable intentions—but within hours of arriving in the city, Fletcher can feel the pull of the life he thought he’d left behind.

Between trying to hide his reawakened criminal life from his wife and his ever-present ministry leader (and landlord) Brad, and trying to keep the mysterious criminal, the Alchemist, from bringing it all crashing down, Fletcher is in over his head. When the unthinkable happens, Fletcher will have to call on his years in the game and his fledgling faith to find an ancient treasure—and restore his family.

Enter the contest to win a copy of
Zachary's book:
The Last Con
leave a comment (and email address)
AND become a follower of this blog
AND/OR sign up to receive posts by email
if you aren't already

Thank you, Zachary, for joining us this weekend!

I'm looking forward to reading this book. I'm not familiar with Zachary Barthels but now that I know a bit about him and that he is a pastor is led by God when he does his writings it intrigues me and I would really like to read this book.

I enjoyed learning about Zachary. I would love to read THE LAST CON. Thanks for the chance to do so.

Thanks for join in us Laurie. I agree, Zachary's book really does sound intriguing. I think men would also enjoy this book. Be sure to let others know.
Thanks!

Yes, Caryl. Based on our previous conversations, this is definitely a good read, matching other books you've enjoyed.

Zachary, you appear to be a very humble servant of God and He is the One who has given you this talent with words. If you can cause some of your readers to question their faith, or better yet, begin a relationship with God, then you will bring glory to Him. I am glad to get to meet you through Mary and I wish blessings for both of you.
Connie
cps1950 AT gmail DOT com

Connie,
Thanks for sharing these words. Bringing God the glory is a number one mission. So true. I appreciate your chatting with us today.

Thanks for the interview! I really enjoyed it and am looking forward to reading The Last Con! Mdp94 (at) bellsouth (dot) net

Hi Morgan!
Thanks for stopping by. Zachary's words are very helpful, I agree. Let me know what you think of The Last Con when you get a chance to read it. It sure looks intriguing and in need of being on a TBR list, right?