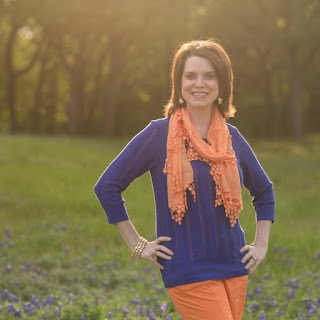 One commenter will win a copy of
Kristen's August release:
The Doctor's Unexpected Family

Mary here. I discovered Kristen's name in a post on newly published books. I contacted her and was so happy to meet her! She is such a sweet person! I asked Kristen to share how God has led her on her writing journey You're gonna love reading her God story. Here is what she said:

I’m so glad to be here with Mary and all her friends today!  Mary asked me to talk about how God has led me on my writing journey, and I think the current series I’m writing definitely has God’s imprint all over it.

I’ve taken my fictional town of Port Provident, Texas on a journey I know very well—that of a hurricane. In September 2008, I was living and working in Galveston, Texas when Hurricane Ike came through. The experiences I had of going through Ike and the recovery that followed have built the backbone of this whole Port Provident: Hurricane Hope series.

The first book, my July release from Love Inspired, Second Chance Sweethearts, takes readers through the hurricane itself and the immediate aftermath. While I had actually evacuated Galveston about 24 hours before the hurricane, I had many friends who rode out the storm on the island, and I know first-hand about those first hours and days trying to figure out what you’re going to do next.

Rigo and Gloria, the main characters in Second Chance Sweethearts have to do the same—but layered on top of that, they also have the additional challenge of not just rebuilding their home and their island, but their relationship that was destroyed years ago due to bad decisions.

The journey through the recovery process is multi-faceted, and I really wanted to take readers through that full road, so I have a series of three more books planned. The next installment, The Doctor’s Unexpected Family, will release on August 1 and is already available for preorder—so you won’t have to wait long to see what happens next to the citizens of Port Provident.

And then in September, I’m especially excited about releasing my first non-fiction book, Storm Surge.  Storm Surge is a collection of life lessons that I learned going through Hurricane Ike and parallel Biblical stories and ideas I leaned on to walk through those dark days. I know not everyone will actually go through a hurricane, but we all go through storms in our lives and how we learn and grow helps us surge upward to the next phase in our lives.

I wanted to write this whole series of hurricane-themed books as a testament to how God never left my side during a very scary and uncertain time in my life. But I especially wanted to bring this non-fiction book to readers as a way to show the real-life story behind the fiction stories. Because even in the wind, the waves, and the pages that have eventually come out of the experiences—God is always there.
.

The writing bug bit Kristen Ethridge around the time she first held a pencil. A 2012 Romance Writers of America Golden Heart Award Finalist, Kristen was discovered by Harlequin through their 2012 So You Think You Can Write contest.

She writes contemporary inspirational romance for Harlequin's Love Inspired line, as well as sweet contemporary romance. Her favorite stories are filled with love, laughter, and happily ever after--and her favorite happily ever after is the story of God's love. Although she has fun creating characters, Kristen's favorite people are her family. She lives in Texas with her husband, children and a self-important poodle.


Nurse-midwife Gloria Rodriguez prides herself on her independence—but right now she needs help. There's a hurricane approaching and she has one very pregnant patient on her hands. With so many people already evacuated, the only one Gloria can turn to is Rigo Vasquez, chief of the beach patrol in Port Provident. The man she holds responsible for the death of her husband. Rigo needs to make amends for his past mistakes, and Gloria's desperate phone call opens the door to make things right with his first love. Rigo is honor-bound to keep her and her patient safe, but once the storm passes, will Gloria still need him?

GRACE FINDS YOU IN THE MOST UNEXPECTED PLACES

Dr. Pete Shipley has always longed for the adventure of serving in an international medical mission, and after the clinic he runs is destroyed by Hurricane Hope, he believes he’ll finally have the chance to get out into the world and use his skills as a doctor to make a difference.

Port Provident City Councilwoman Angela Ruiz takes her responsibility to her constituents seriously, but red tape is keeping her from reaching out and solving the immediate needs for the residents of her district after Hurricane Hope’s destruction.

As donations roll into the island, Pete is inspired to create The Grace Space, a community gathering spot in the heart of Angela’s district. Angela teams up with him and uses her position in city government to secure housing. Not immune to the effects of the disaster, Angela’s own home was destroyed, which leads to her renting a small apartment from Pete.

But when Pete’s appointment to an international medical mission comes, will the doctor leave Port Provident, The Grace Space, Angela and her daughter—or will he stay with the family he didn’t expect to love and realize he can change the world without leaving home?

Thank you, Kristen, for joining us this weekend!

Good Friday morning Mary and Kristen. It is always nice to meet an author I'm not familiar with. Kristen, your books sound very heartwarming and since they reflect your experience dealing with a hurricane, they are also very realistic.
Hope both of you have a great weekend.
Blessings,
Connie
cps1950 (at)gmail (dot)com

I know, Connie...doesn't the hurricane side of the story just draw you in? Me too. This really looks like a great read.

Good morning, Ann! So nice to see you today. I'm glad you could come and chat with Kristen and me. :)

This looks like a book I'd enjoy reading.
I am already an email subscriber to this site! :)

Hey, Barb! So nice to see you this evening. I agree with you. I love the adventure of working through the problem. So many readers could identify with this story, I think.
Thanks for chatting with Kristen and me. :)

Hi, Connie! Thanks for stopping by. I wanted to give readers an idea of what the process was like, while still having a sweet romance to cheer for.

Hi Ann! Thanks for stopping by!

Hi Barb! I hope you have the opportunity to read the story and enjoy it! Thanks for stopping by!

Ha ha! I'm on my phone and Google defaulted to an old account. Crazy! But that's me--I promise!

LOL, I was so wondering!

This looks like a really great read! Definitely a series to add to my to-read list! ☺️
Mdp94 (at) bellsouth (dot) net

Hi, Morgan! Welcome, so nice to meet you. I totally agree that Kristen's book and the series would be great to add to a to-read ist. I hope you get a chance to read her series soon. Have a super summer and join us again! We loved chatting with you.