How Can A Book Connect an Incarcerated Parent With Their Child?

Happy Saint Patricks Day to you!

Did you know that Saint Patrick was kidnapped and made a slave at age sixteen? While he was a slave, He had an opportunity to learn about God. He later returned to his homeland and told the people about God. I didn't know this until I researched his background for today's post.

How timely, because I had planned to share with you a related topic.


Recently I read about a program designed to help incarcerated moms and dads connect with their children. Granted the men and women committed some crime to put them in their situation, but their children still have needs. This program gives these parents an opportunity to participate in their children's lives. To have a purpose for their own life. To do something good for others.


In an article written for the American Libraries Magazine,  http://americanlibrariesmagazine.org/2014/12/08/reading-on-the-inside/ A Minnesota librarian, Marcou designed a program called: Read to Me. Incarcerated parents interested in participation in the program were taught how to read a children's book out loud. When ready, the men and women were helped to make an audio recording of their voice reading the book. The recording and the book were then taken to their child/ren.

The Read to Me program won the Marshall Cavendish Excellence in Library Programming award in 2004. I can see why. What an amazing opportunity for parents and children who wouldn't normally have a chance to connect.

"The number of kids with incarcerated parents has increased nearly 80% in the last 20 years, according to data from the Bureau of Justice Statistics. More than 2.7 million children have a parent who is incarcerated, and parents of another 10 million children have been incarcerated at some point. The experience can be profoundly difficult for children, increasing their risk of living in poverty and housing instability, as well as causing emotional trauma, pain, and social stigma. But librarian Sarah Ball, who runs the Daddy and Me program for the New York Public Library and the city’s corrections system, says she sees some of that stress melt away when kids are able to come to visit their parent and read their special book together."

As you can see, different locations have different names for the same program idea.

This article (see the link above) also gives tips how to start a program like this in your area. Maybe all that is needed is a voice, like yours, to spark the idea in the mind of someone who could start the program.

This is a program in Iowa: 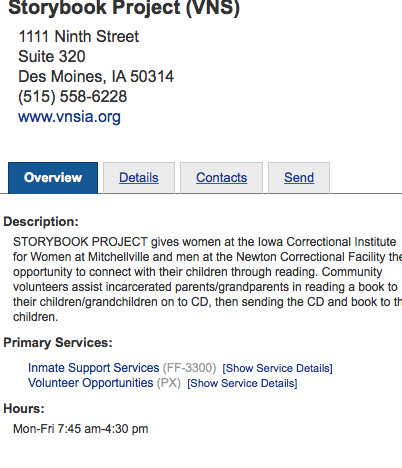 If you'd like to participate by donating books to an already established project here is a FB link for the Picture Book Pass it On Project: https://www.facebook.com/PBPiO

These parents won't see their children's faces when the audio is played, but their the boys and girls will be able to know their parents want to still be a part of their lives.


This post has been brought to you by the one word: Connecting