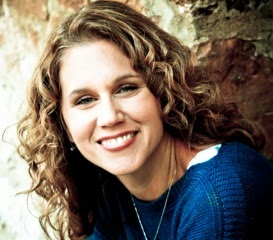 
I remember Janice so vividly from the conference. She had a bubbly enthusiasm for her geology topic. This gal is a brainiac and an absolute delight to talk to. Her smile bursts during the conversation. How did a geology aficionado become a Christian Fiction writer? She digs into her topic, explores what is hidden, and exposes the mystery.

No one would ever tell you to write out of a place of fear (except maybe Stephen King), but for much of my life I wrote, or rather didn’t write, because of fear.

As a kid growing up in the Midwest, I had tons of dreams for the future: archaeologist, veterinarian, actress, even the first woman president (hey, I still have time on that one). But buried deep in the hidden part of my heart was a longing I was too scared to voice.

I wanted to be a writer.

I didn’t talk about it because somehow I knew I wouldn’t be any good at it. It’s true, I had words flowing through my head, but those words said I couldn’t possibly succeed at the one thing I wanted to do.

In high school, I completed a short story for a creative writing class. I agonized over turning it in. Would the teacher hate it? Of course, she would. But what if she didn’t? What if she said it was the greatest thing she’d ever read?

Back then, I didn’t know God, so I didn’t know that He often gives us desires to use the gifts that He’s given us. For a long time, I didn’t write at all. When I did, it felt like something I did solely because I wanted to. Kind of like singing. I love to sing, but there’s a valid reason nobody is asking me to join the church choir.

It took me almost thirty years to admit that my writing is a gift from God.

So, my writing journey has been a story of fear.

In college, I turned to science, which I still love, because the fear of rejection is minimized. There are few gray areas and no artistic opinions. Data doesn’t care if you express its nuances well.

After getting my geology degree, I went to work as a Research Geologist. I loved my job, but I felt like I had left an entire side of my brain on autopilot. Although I still longed to express myself creatively, I didn’t have what writer’s call, a voice. I didn’t know what to say about the world that hadn’t already been said.

When I became a Christian, God gave me a voice. I saw the world through different eyes and I had stuff to say about it. But the new voice that came out on the page didn’t silence the other voice in my head, the one that kept screaming I was a terrible writer. I would fail.

Along the way, God gave me little moments to reassure me that I was on the right path. A friend called to say she read the first draft of my novel and loved it. Someone at church told me a devotion I wrote touched her heart. My critique partner convinced me my words were and are a ministry. God even used a contest to keep me going. I was a finalist in the American Christian Fiction Writers Genesis contest in 2013 and a semi-finalist in 2014. I have fiercely clung to these scattered moments of encouragement.

Over the years, I’ve come to realize that what I do with the fear is a choice. I can let it paralyze me or I can let it bring me closer to God.

I freak out—because an editor passes on my manuscript.
I turn to Him.

I freak out—because the author who said he would endorse my book never contacts me again.
I turn to Him.

I freak out—because it’s been five years since I’ve been trying to get published and that seems like forever.
I turn to Him.

Every day, I decide that in my journey fear does not get to win.

I never feel closer to God than when the words flow out of me like a heavenly downpour soaking the page. How could I give that up just to indulge in my fears?

I’m not published yet, but no matter what happens with that, I choose to rest in God’s perfect love—it really does cast out fear. And fear is the only thing that can keep us from fulfilling God’s call on our lives.

What are you afraid of? Perhaps God’s waiting for you to turn it over to Him.


Janice Boekhoff has a B. S. degree in Geology from the University of Northern Iowa. Her professional career as a Research Geologist included four years with the Iowa Geological Survey before she left her position to stay at home with her growing family. She writes Christian suspense novels from Bettendorf, Iowa, where she lives with her husband and three kids. Janice was a 2013 Finalist and a 2014 Semi-finalist in the American Christian Fiction Writers Genesis Contest. Her passions include peppermint mochas, the television show Castle, and reading science magazines to find out the latest creative word the scientists have made up.

She looks forward to saying hello to you! 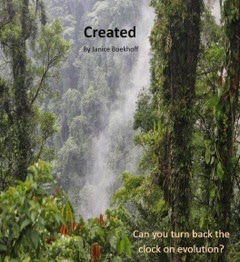 Created:
Paleontology Professor Travis Perego has spent his whole life studying dinosaurs and his entire career teaching evolution. But when his sister’s death leads him to commit his life to God, his worldview is transformed. Now, he struggles with the conflict between evolutionary theory and the Bible. And if he doesn’t figure it out soon, the dean of the department will fire him.
When a graduate student tells him about a biology professor who is trying to prove evolution true, at first, Travis is curious. But he soon becomes desperate to know if the biologist succeeded. Could this man have found a way to retrace the path of evolution in bird DNA—in essence, reverse engineering a dinosaur?


Before Travis can find out, the professor disappears, along with a mysterious creature from his lab. Travis follows them into the jungles of Costa Rica, where he will risk everything to discover the truth. 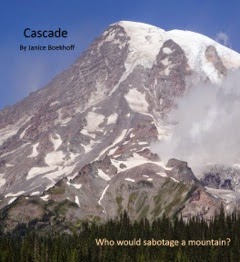 Cascade:
Volcanologist Lenaia Talavera is called back to Mt. Rainier and the small town of Mayim to investigate problems with the monitoring equipment. She quickly discovers the equipment—an early warning system for rising magma—has been sabotaged. But who would want to risk an eruption?


Then, two women from the area disappear. Are the sabotage and the missing women related? When Lenaia’s ex-boyfriend is arrested for a similar act of sabotage, her search for the truth intensifies. He proclaims his innocence, but should she believe him? As she digs deeper, the evidence leads her up the mountain where she uncovers a sinister plan. Can she stop a killer before he buries her and the little town of Mayim in a cascade of evil?

Thank you, Janice, for Joining us This Weekend!

Readers,
Since Janice is not yet published, let's send her a word of encouragement. Please take a moment to write her a comment. Thanks!

Great article Janice!!! Very encouraging!!! His plans are in His hands! Thanks for all your help in this writing journey!. See you next week!

I'm looking forward to reading your books when they get published, Janice. Have you read the Raleigh Harmon books by Sibella Giorello? Raleigh is a geologist who works for the FBI. The author has a degree in geology as well.

@Jen, Love you, girl. See you next week.

@Sylvia, thanks for reading my post and thanks for your suggestion. I have read Sibella Giorello (isn't that a fantastic name) and her Raleigh Harmon series. I loved it. Forensic geologists are fascinating. Sibella and I have very different writing styles, but she's a beautiful and talented writer. Thanks for commenting, Sylvia.

Jen,
Welcome! Thanks so much for your encouraging words for Janice. Hope to see you again!

Sylvia,
Great suggestion! I see Janice has read those books as well. Thanks for joining our chat today, hope to see you again!