Book Review-Duchess by Susan May Warren


I have been wanting to read a book by Susan May Warren this whole year. Just recently, I set my hands on a copy of Duchess, the third book in a series called Daughters of Fortune.

As local chapter president of Poky Readers Anonymous, I was cast out of office after sailing through this delightful historical read in less than three days.

I've always been intrigued by any historical series that follows the daughters. Typically each generation has a book devoted to the current daughter. We, the readers, get to step back in time then walk forward witnessing the changing political and economic influences of history while being captivated by a wonderful story.. 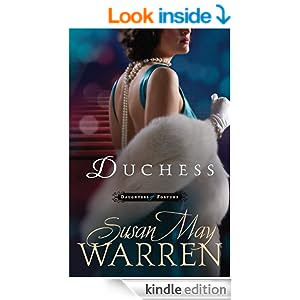 Duchess opens shortly before the great stock market crash in October of 1929. Rosie Worth dreams of becoming a famous movie star. Standing in the right place at the right time, she finds herself an instant starlet playing roles on the silver screen. Her new career also gives her a name change: Roxie Price.

Fans crowd around Roxie every time she stepps into public. Cameras snap her photo. Everyone loves the glamorous Roxie except her husband, the studio owner. He only married her to keep the business afloat. But no one, not even Roxie can save their film company from the debts he racked up when Black Friday dawns. The same day her not-so-devoted husband takes the easy way out.

Alone and penniless, Roxy claws her way to resurrect her dreams. Mistakes and wrong turns plague her until the day Rolfe Van Horne, duke of Belgium walks back into her life. The young love she once had for him died, but his new movie plans leads her to believe she can step out of the muck of a falling star and become an international name.


If you recall events from this period of time from school, you will be intrigued with the in-depth research Warren compiled. Facts are woven seamlessly through the story painting a very real telling of Roxie's life during the stock market crash, and the unrest in Europe.

I am one of those readers who prefers to learn or revisit facts from a story. Fiction writers must painstakingly check all their facts and present it in such a way to not sound like a textbook. The responsibility is greater for a fiction author, I think, than for a non fiction author.


Your turn: Join my cause.
Name something you learned while reading a fiction book

Have you read one of Susan May Warren's books?
Which one?