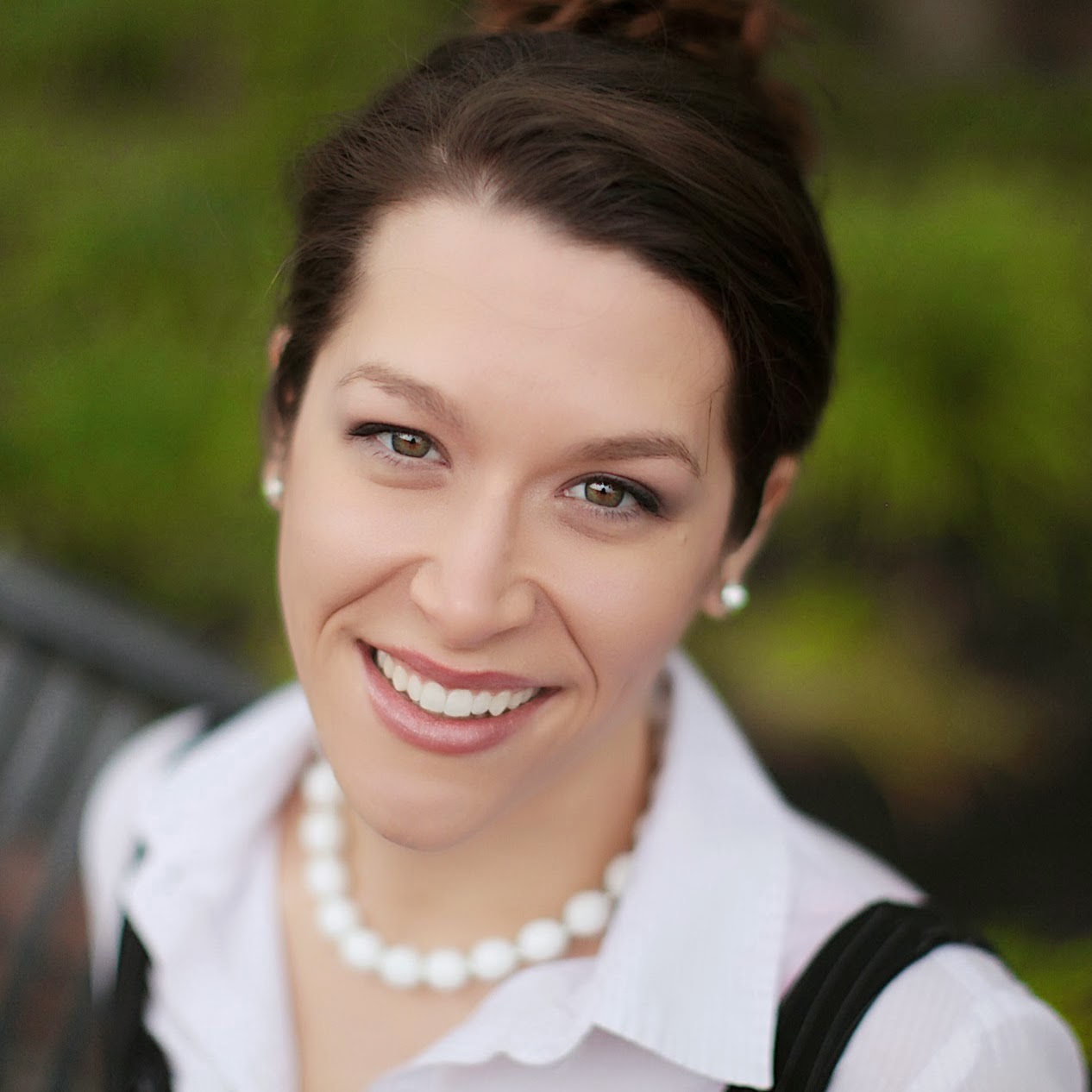 I've had a wonderful time getting to know Bethany on FB. We've chatted and shared some amazing stories, some you can read below. We've become good friends. During one of our conversations I asked her to join us and share how God has led her on her writing journey. Here is what she wrote:


Gravitated to Things That Go Bump in the Night


It all began when my mother pulled me out of kindergarten halfway through the year and started homeschooling me. I'd simply gotten sick one too many times, and Goodness knows I got in too much trouble for talking to my little seatmate, Brian. (To this day, I'm too extroverted to spend much time sitting at my desk, though I love writing so!)

I would get my schoolwork done before lunch and then dive straight into a stack of library books. My love of the written word grew and grew with my English-teaching father there to encourage me all the more. I'd while away the hours penning poetry, mainly about cats, until fourth grade when my parents put me back into public school.

At the local elementary, I poured over my fiction. It was around this age I grew especially fond of Nancy Drew mysteries, and have now begun to collect them as a sentimental remembrance of what started me writing mystery/suspense.

In the fifth grade Gifted and Talented program, teachers encouraged the stretching of my imagination. I believe at this time I became convinced: God wanted me to be an author.

I began my first novel, Lily. It was in the same vein as Janette Oake, Bodie and Brock Thoene, and Gilbert Morris. At that time there wasn't a lot to choose from in Christian fiction. Now as I look back on the plot, I giggle at how little romance did for the plot. Lily was mostly centered on the mystery of what abuse had happened to the heroine as a child, which she thought normal. When told to the hero, red flags raised in his mind. By golly, that hero was going to press and search for the villain who did this to her!

After college, marriage, and an anticlimactic career as an RN, I had my first child and got back into my writing. It felt so good to be doing what God had called me to. Once more I began to pen a historical romance; this time instead of western prairies, the setting was sixteenth century Vienna, Austria.

Rachelle Gardner gave some VERY good advice for The Prisoner and the Heretic. She wrote me a long email teaching me where to go to improve my backstory-heavy beginning, among other heinous problems. But the most valuable thing she said was, I KNEW HOW TO WRITE! I think without those magic, blessed words, I may not have picked myself up or brushed myself off, and kept going.

I discovered that historical romance is NOT my genre.

At around this time, (advised by Brandilynn Collins) I joined ACFW and learned I should probably begin blogging. My first attempt was a short story fiction blog, where I would just take a character idea and a plot twist and run with it. One thousand words later, I would stop typing and read what I had, edit a bit, and post. My characters from Murdered Between Stalagmites were born this way. I also realized my true genre was suspense!

One contest finalist experience and one contest winning experience later, I realized my first publishable novel, Six Solitude Road, was a “tweener.” (Okay, that was what Chip MacGregor told me...) Though the Christian worldview was strong in my book, it also had some edgy elements considered too dark for the CBA (Christian market).

I decided to self publish, and move forward with another idea for a very Christian romantic suspense. I will hopefully be able to finish it and pitch it at this year's ACFW conference! Go hybrid writers! :)

Recently, a Facebook friend (raised Buddhist) picked up a copy of Murdered By Stalagmites. While reading it, she was touched by what the characters said in such a way, she felt I was someone who knew the Lord and would be willing to listen to some spiritual questions she had! She gave me a call and we talked for an hour about Jesus! SO AWESOME! 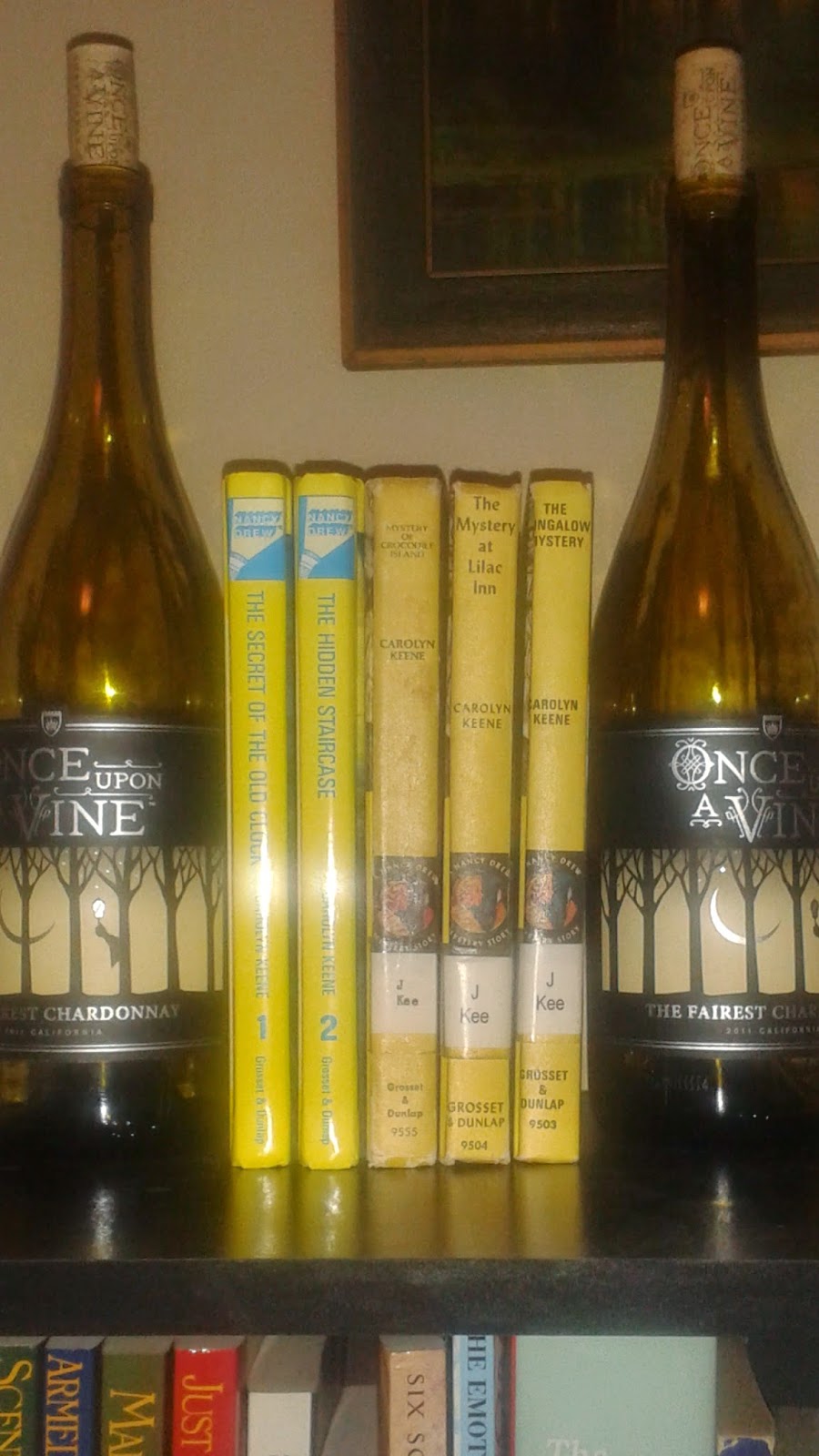 Bethany lives in Houston with her husband, daughter and son. After practicing as an RN for five years, Bethany left the nursing field to pursue a fiction writing passion the Lord planted in her heart when she was a child. And as Nancy Drew mysteries were her guilty pleasure during those early years, so she naturally gravitates her pen toward the things that go bump in the night.

She draws many interesting and perplexing facts from her former career. These experiences come in handy when characters get themselves into serious scrapes, and also gives a psychological spin to many of her plots.
She’s allergic to milk, Sulfa drugs, and people who stop in the middle of intersections while driving.
2011 ACFW Genesis Finalist for Mystery/Suspense/Thriller Winner, 2013 RWA Daphne du Maurier award for Inspirational Romantic Suspense  2013 ACFW local chapter vice president. 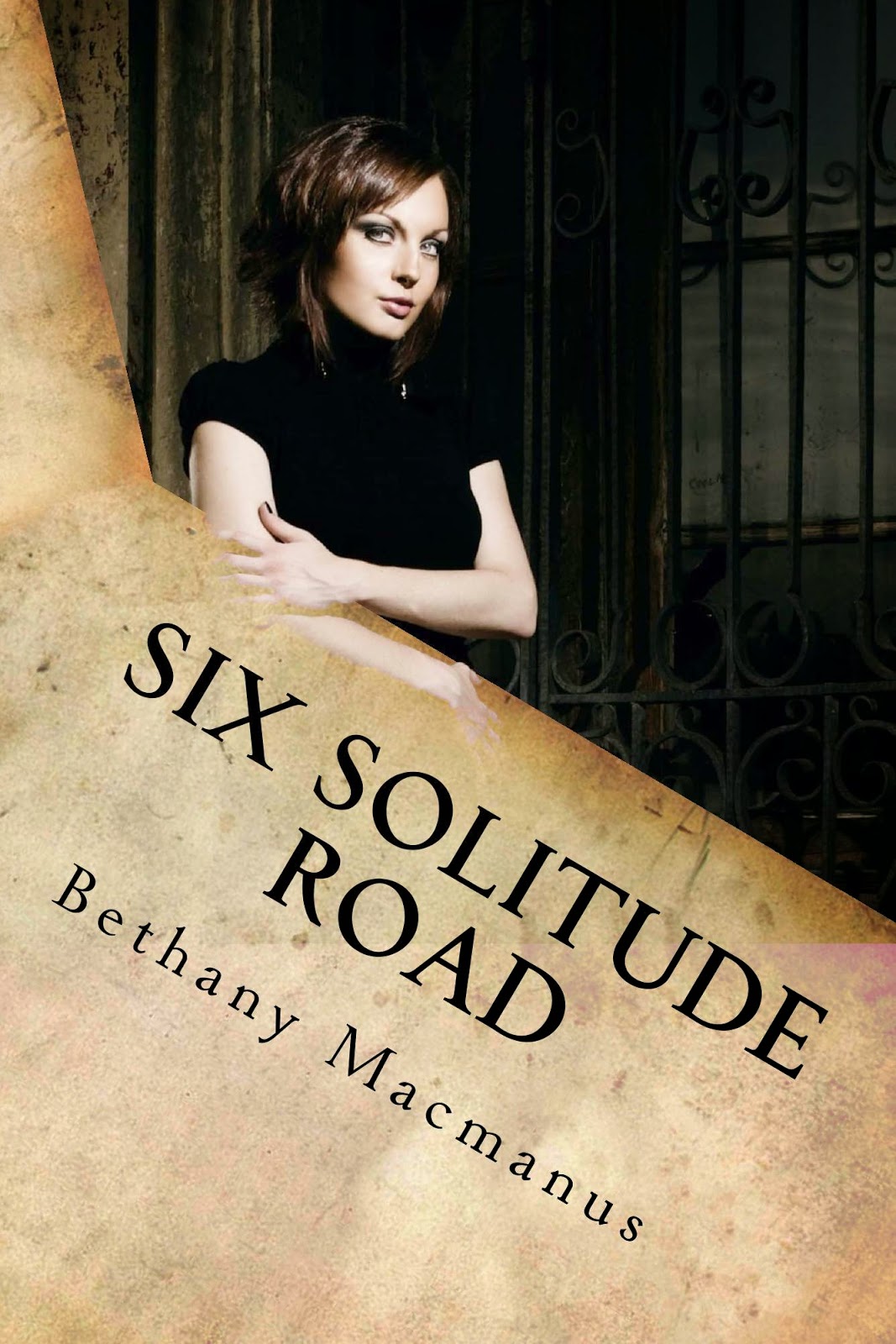 Six Solitude Road:
Her husband is the prime suspect in the kidnapping of one of her students.
Now she must prove him innocent.

One morning, Kate Marset discovers her seven year old student, Becca, is missing, and all evidence in her disappearance points to Kate’s husband, Clint. At the Christian school where Becca disappeared, Kate finds more than one lead the detectives have overlooked. Armed with a Colt .45 and an incriminating flash drive file, Kate struggles to prove Clint innocent in this kidnapping. All the while, her own daughter Janna slips away emotionally. Is something dark at work in the little girl’s life? Or is it just growing pains? The only way for Kate to find out is to dig into the layers of sin holding her town, her husband, and her own house captive.
(There is a book trailer under Case Files tab on my website: http://bethanymacmanus.com 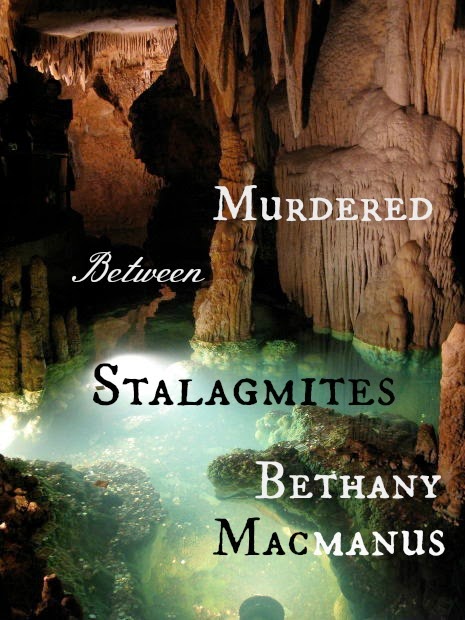 What they got was murder.

When Jacob Mercer is trapped with seven strangers in a series of caves, he determines to seek out the mysterious predator responsible for the hoax which lured them there. Then, one of the inhabitants is murdered the first night, and Jacob has to play detective. Will he uncover the killer of Siren Song Caves? Or will the killer find a way out before anybody else?


To enter the contest for
Bethany Macmanus's book: "Murdered Between Stalagmites":
leave a comment (and email address)
AND become a follower of this site,
OR sign up to receive posts by email
if you aren't already.

International Readers are also invited to enter to win a copy for your Kindle!!
US residents may choose between a Kindle copy or paper copy.

Thank you, Bethany, for Joining us This Weekend!

We never know when our work will have am impact on someone's life. I'm so glad she took that call, aren't you?

Your turn: Did you have an unexpected opportunity to share your faith in Christ?

As a librarian, I was not permitted to openly talk about my Christian beliefs. However~~if a patron confided in me about a problem or an illness, I quietly told them that I would pray for them. More than once, I had further opportunity to witness to them. It was sometimes a silent witness but through my concern and caring, I was able to show them God's love.

Thanks for sharing!
Connie
cps1950@gmail.com

Wow! I'm not sure I have the nerve to read this - not the murder part, the cave part! Caves are scary places!

I love the idea of blog with short stories. So glad you shared on Mary's blog. Mary, so thankful for your blog and faithfulness.

I was able to share my faith in Christ in a most unexpected situation. I would be happy to share privately, but I don't want to cause any embarrassment for anyone by posting it in a public setting like this. However, I believe in the midst of the circumstance the Holy Spirit impressed on me to love women. Really love them, sharing His grace, mercy, and peace.

What a fantastic opportunity. Thanks for sharing, Connie. I'm serving up sweet tea because it's a bit toasty here.

This sounds like a pretty special moment that God gave you. Doesn't it feel extra special to sense the work of the Spirit?

If you choose to read this book...which I hope you do...don't forget to read the last page rather early in the book...its a great way to know the character survived. sigh.

I'm so glad you stopped by!

Connie, thanks so much for sharing! Silent witnesses are awesome because you are being Jesus' hands and feet.
Cindy, you are right, blogging short stories is fun, and a very workable way to make sure you sit your "cheeks in chair" and write.
Thanks for inviting me into your corner of cyberspace, Mary. It was an honor to be on your blog!

I have had the opportunity to share, but since they are really not my stories to tell I will remain silent.

That's more than fine, Mary. I'm just so glad to hear you have these great blessings to think back on. Praise God. :)
Thanks for stopping by today. Sure loved chatting with you.

Great post and glad to get to know more about Bethany's writing "backstory!" I've already read her books so don't enter me, but I'm so pleased to know your "tweener" novel stirred questions in a Buddhist. That's what I want to be writing, too! All the best, ladies!

Heather!! Hey, girl! Getting that call was exactly the encouragement I needed to keep writing. It's awesome, beyond words, the way God works!
I know you know, you've been getting some excellent opportunities yourself. Thanks for connecting. :-D

Hi Heather,
So glad you could join us today. Stirring the hearts of readers certainly is primary goal. I imagine Francine Rivers and other authors have had many notes from readers like this. I hope, one day, you, too, will have the privilege to answer stirring questions from a reader. When you do, be sure to share the news with us so we can rejoice with you. :)

Thanks for chatting with us.