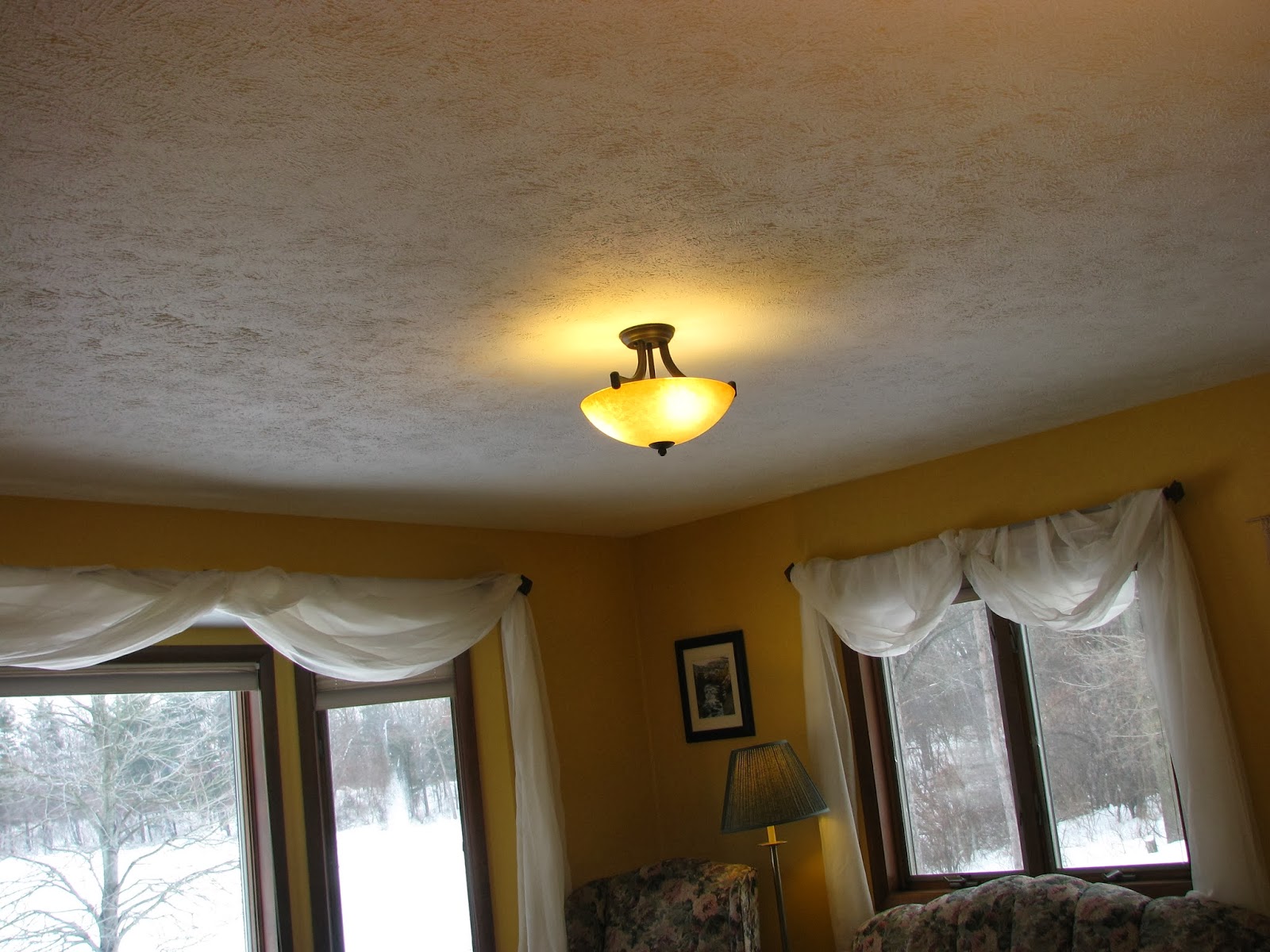 With the bitter cold keeping hubby and me inside--okay, I'll admit it. It's keeping me, the wimp inside-- we chose to paint the living room.

The furniture was shoved into the center of the room and tarps put down. Next we taped the woodwork and pulled out the paint.

We bought this awesome ceiling white paint that goes on pink then turns white. Love this stuff. I asked hubby, commander of this project, which direction he wanted the strokes to go.

He pointed to the outer wall and said, "May as well go this way since I already started painting."

Fine. I walked to the other side of the room and kept my strokes like he said. After a few splats in my hair, I looked over at him. He had turned his roller in a different direction!

No. This cannot be. He set the standard, I followed, it is etched in stone.

"Sure I can. The ceiling is textured."

And that was all he had to say. By the time he reached the center of the room his roller must have gone in at least fifty directions (only slight exaggeration…you understand).

While waiting for this first coat to dry, we took a coffee/tea and snack break.

There are probably half a million applications to this experience:

Flexibility is good.
The first interpretation of an answer may not always be the only interpretation.
Sometimes relinquishing our way involves more than one step.

Will you suggest some others?

I recently read about Mr. Cardwell, a missionary serving with Hudson Taylor. When Mr. Cardwell arrived in China he mentioned his heart's desire to serve in a particular city. Taylor assigned Cardwell to a different place in greater need of workers. Cardwell and his wife didn't do well in the assigned place. He became chronically ill. After Cardwell made some serious errors due to inexperience the other missionaries working with him wanted to send Cardwell home.

Hudson Taylor gave the man a second chance. He sent Cardwell to the location his heart and told him to go. In a short time, Cardwell's health improved tremendously. Other missionaries sent letters to Taylor telling him of Cardwell's incredible voyages into areas where no missionary had travelled. Cardwell started a church near his home. Chinese locals walked from long distances to attend his services.

Would his ministry have been so meaningful had he been assigned first to the city on his heart? I'm thinking not.

Our paths are not always straight,
but they definitely are the correct ones,
leading up into situations
that cause us to relinquish our way to God's way.


This post was brought to you today by the one-word: Relinquish.

In considering application to the vignette, I thought of how God sometimes gives detailed instructions as to how to achieve a final result, such as in building the tabernacle, and at other times He just might say or give the impression, "Just do it!."

He made us in His image so He gave us creativity. So perhaps He may delight in seeing what we will come up with given the gift of creativity He gave us.

For Sunday School I made salt dough hearts with a hole punched near the top center for the children to paint and dtring for necklaces to wear or give. I provided the acrylic paint, brushes and salt dough hesrts. The children used their creativity to make some beautiful and unique hearts. I was overjoyed to see all they made.

Janice,
Yes, I see and agree with your point. There are several instances told in the Bible when God expected and gave specific instructions, and yet other times He opened the door to a person's input/creative/ thoughts/personalities.

What a fun craft you did in your SS class. Most kids thrive on being given the opportunity to create. Some like the security of being in a box. God know our personalities, what we need the most. Sometimes we need to be tossed out of the nest and forced to fly, other times we need to be reigned in.

Loved chatting with you, Janice:)

Great post! I've certainly learned a lot about the word RELINQUISH!! I am one of those stubborn people who seem to need to commit mistake after mistake, before being able to RELINQUISH my way of doing things - in favor of God's way. But - I've been so blessed by Him since I HAVE RELINQUISHED, and probably would not have appreciated my blessings as much, had I not been allowed to make so many mistakes!

Thank you, Bonnie.
You bring up a good point. By relinquishing we will find blessing. I like that. It's hard to do though, right? Bur well worth it.
God is good, loving, and kind.
Have a wonderful day.