He Thought of Her 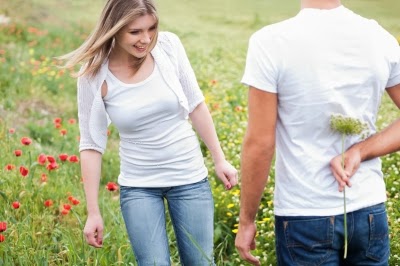 Last weekend I went with hubby on his business trip. He worked the night shift and slept during the day. To give him quiet time I went to the hotel lobby to do some writing and half listen to the Olympics.

A man was seated at one of the tables. He had a tablet, papers, and a card sprawled out in front of him. The card was a Valentines card. He'd mostly filled the white space with handwriting.

I walked to another table and pulled out my laptop to work. The man played a video, I couldn't hear the words but a child was speaking.

He could have been swimming, working out, goofing off with co-workers or friends, or any of a hundred other things, but he thought of her and bought a card, took the time to write a long message, and probably dropped it in the mail later that day.

One day Mary came to Jesus. They were at a wedding in Canan. She'd heard the wine would soon run out and became concerned for the bride and groom. Knowing He could solve the problem, she asked Jesus for help.

Jesus said it wasn't His time yet. Still, He looked into the eyes of the woman who was His earthly mother and thought of her. He not only thought of her but He also thought of us by His example. He chose to supply the need by turning water into the best wine ever served.

In both of these cases, the person did more than was required to meet a desire--not a need--to demonstrate a pure thoughtfulness we call love.


This post have been brought to you by the one-word: Thoughtful

Will you share a unique example of thoughtfulness you've witness or experienced?

I'll go first. Before we were engaged, my hubby was stationed in the air force overseas. I hadn't heard from him in some time. I sat in my living room doing college homework and heard a knock on the door. Yes, you've guessed it. He found a way to come home for few days. He wanted to know if I still loved him. I know we see these same kind of reunions on TV, but it is so incredibly special when it happens to you.

Mary, I see a lot of thoughtfulness in the community of Christian writers. Just remembering back to when I met you by reading your profile and finding out you had written for an editor I had an assignment from. I had a question for you. You did not know me and could have brushed me away, but you chise to be helpful and thoughful. Thank you again.

What a sweet thing to say, Janice. Thank you.

Yes, you were very kind, patient, and went the "extra mile" with me, also, Mary, when I had problems the first time I tried to follow your blog. It left an impression on me of what a caring, gentle, lady you are.

And while we're on the subject of writers/authors - an author, whom I have since become very close to, surprised me by sending me a paperback copy of one of her books that I had wanted - in appreciation for my support of her writing/books.

Thoughtfulness always brings joy to the giver, as well to the recipient!!

Thank you, Bonnie
I have a feeling you have and are showing kindness back to others. One way you do it for me is stopping by to chat. Friends do that.
Have a great day, friend.