A Christmas Present Just For You Part 5 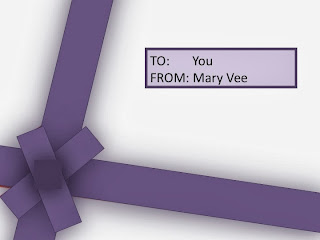 This is the part five


of the story, Purple Memories.


My Christmas gift to you.


Part Five (click if you missed parts one, two, three, or four)
By Mary Vee

Grandpa sat on the floor by the Christmas tree. As if on cue, the first notes of the carol, O Christmas Tree, sounded from his stereo in the next room.

He waved for the children to come help him pass out the gifts. All the boys and girls ten-years-old and younger, including the new toddler, flocked toward Grandpa. He read the name on the tag of each package and handed the gift to the next child standing closest to him. Some of the little ones forgot which uncle was which, but they all remembered silly Uncle Luke.

Leah curled her legs on the chair and watched the beehive of children bustle about the room. This tradition had played to an expanding group every year since she first met her sweet Jerry. No one opened a gift until the youngest family members had delivered every package. A small stack of presents grew in front of each adult, larger stacks for the children.

Grandpa had crawled under the tree to reach gifts nestled in the back corner. He gave the last one to the toddler, who with sandy brown hair and deep brown eyes reached her little arms out to hold the package. Grandpa's eyes twinkled. His smile broadened with a dash of whimsy. "This one is for you."

The tyke stood staring at the contents in her arms. Her eyes widened with delight. This time she didn't have to hand the gift to anyone. She toddled to her mother, securely holding her prize and sat on the floor.

Grandpa brushed the pine needles from his hands. He stood, groaning with signs of age before toddling to his chair next to Grandma's and sat down. This, the final signal gave permission to everyone to open their presents.

Paper ripped and flew into the air like chunks of confetti. The children gleefully showed their parents each new toy and, if the boy or girl especially found favor in the gift, they showed it to their cousins. The uncles, even those without children, knew better than to try to open gifts before all the toys had been assembled. With screwdrivers in hand they waited for the first request to put something together.

This year, though, a laser tag game won the attention of all. Once the box sprang open, the uncles raced the younger cousins for a laser gun. The dog barked, the children squealed, the uncles ran for cover, popping their heads up long enough to tag someone.

Grandma's voice pierced the mayhem. "Not in here!"

Like a flock of birds sharply changing direction, the game migrated to the living room, leaving the others to open their gifts undisturbed.

Leah reached for her first gift. A small narrow box sealed with a purple ribbon. She knew right away the present came from her mother-in-law and would be stylish. She broke the seal and lifted the lid. A lovely purple silk scarf. She rubbed her fingers over the soft, elegant fabric. How the sweet woman managed to remember every family member's likes and dislikes boggled her mind.

Years ago, on her first date with Jerry, she happened to mention her favorite color purple--just once. He must have told his mom. The year after he died, Leah received a lavender brooch for Christmas. Each year after, the gift from her in-laws had purple somewhere in it.

Leah took the scarf out of the box and draped it around her neck. It naturally matched her outfit since she happened to wear a dressy black outfit. She looked over to her mother-in-law and said, "Thank you, so much."

The cheery smile that followed brightened the thoughtful woman's face.

Then the uncles burst into the room leaping backwards and aiming their laser tag guns at the grandkids. They tumbled over the sofas and hid behind the barricades as the swarm of little kids blazed into the room.

"Grandma, Grandma. Save us." They piled around her hugging her neck, arms, and legs.

"Don't worry, children, you are safe by me."

Well, they might have been. For a short time. Until the uncles charged from their hiding places into the center of the room. The children squealed and fled from the room.

Leah laughed with the others and thanked God for this home and the sweet family who adopted her into their clan.

As for me, I am looking to reach 200 followers by Christmas.
To become a follower scroll to the fifth box down on the right
and clicked the blue "Join this site button"
I would be so very happy to have you as a follower.
Posted by Mary Vee Writer at 1:00 AM

I have a feeling you are speaking from experience. :)
I felt the same way about my grandma, and should my children give me grandkids, I plan to be the safe place for them.
Good chatting with you, Nike.