Dedicated to the One I Love

Today is my wedding anniversary. 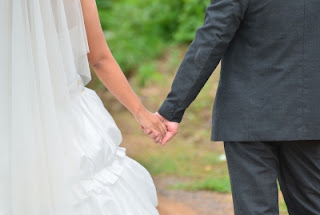 My children told me he has a surprise for the next two days, and that is all they said. They have amazingly kept his secret safe.

I have been blessed to have the husband I do. He is quite the gentleman and always has been:

He still opens doors for me.

Sends me texts during his break from work:  Luv u

Actually remembers our anniversary and my birthday

Works extra hours to afford something special for these celebrations

Drops me off at the door for church, parks the car, then meets me inside

Leads family devotions in the evening (now that the kids are older this is sometimes done by Skype).

Listens when I talk about the stories I write even though he totally doesn't understand why anyone would read fiction much less want to write it.

Agrees to go on wacky adventures to the mountains, hot air balloon rides, and communist countries.

Has been a faithful father and example to his children. The kids especially love to see the texts he sends from work.

He has been the example Christ has asked him to be for our family. 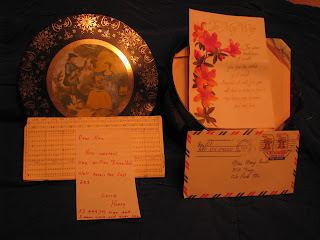 I still have a tin full of the letters he sent while we dated, the flowers (now dried) sent when he was in the military, the jewelry box he bought me while overseas, and the memories of good and bad times worked out.

I made him the kind of cake we had at our wedding from scratch, wouldn't have dared attempt this when we were first married. Learned a lot about cooking over the years. And now, since I am writing this in advance, I am curious what the surprise will be.


Friend, what is your favorite anniversary and why? (it can be any kind of anniversary. A first book sell, a first trip out of state, a first...anything)

Wow! Mary, you are indeed blessed to be married to such a gentleman with all of his thoughtfulness. We rarely do anything to celebrate an anniversary partly because it falls in the middle of the busy tax season. Also, it was not a tradition for either set of our parents to do anything for anniversaries so I guess tradition got hold of us early on.

I do have one very special memory from our first anniversary. We were at Edisto Island in South Carolina and went out on the beach really early, before dawn, to see Halley's comet. My husband's mom got to see it twice in her lifetime. That was very special, and I guess it needed to be given that we have not really celebrated other anniversaries very often.

HAPPY ANNIVERSARY!
(forgot to put that sentiment into my first post) Have a happy two days with your blessed husband!

Happy Anniversary, sounds like you found a great guy!

You saw Haley's comet? Wow Janice, that was special.
I suppose we all learn to make our own traditions, perhaps you have something small, simple, and that conveys all the meaning.
Sure love sharing with you today.

I sure did. I am soooooo blessed.

Since my husband is sick and can't get out of the house, he drew me a beautiful picture for our anniversary.

Kathy,
Some of my greatest treasures are drawings from treasures of God. I still have he ones my children drew. What an honor to have this beautiful picture from your husband. I am so happy for you.