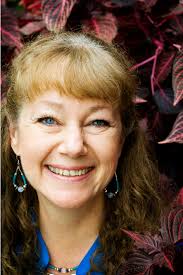 Today I welcome an author who loves to read, ride horses, play with dogs, go sailing, basically anything outdoors. She is a fun person to have as a friend:
Miralee Ferrell
Enter to win Miralee's book,
Blowing on Dandelions
Scroll to the end of the post to see how to enter.


I asked Miralee to share with us how God had led her on her writing journey. Here is what she said:

I know a lot of writer’s believe they’re called to write but my calling was more dramatic than you might expect—and it showed me quite clearly that God had something special in mind.

I was at an evening church service with a visiting pastor speaking. At the end he had a call for prayer, and I went forward. He prayed with me and then stopped. He said he believed God was calling me to write and it needed to be published. I went home, prayed about it, and felt a confirmation, although I had no idea what direction to go. 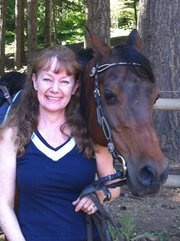 All I could think was to chronicle the things the Lord had done for my husband and me since we met, which turned into a 60,000 document, but I couldn’t imagine anyone caring to read it. So I moved on and wrote several true-life articles, all of which were published that first summer.

I had no idea what to do next, but a friend suggested I try Christian fiction. I didn’t think I had any creativity, but she urged me to use something from my life that I could fictionalize.

Soon after, my debut novel, The Other Daughter was born, based on an event in our lives. An eighteen-year old girl wrote us a letter saying she believed my husband was her father. Talk about a shock!

I revised the idea to a thirteen-year-old girl and changed the events and emotions, but it poured out, burning to be told. It took me about seven weeks to write the first draft, another 6-8 months to rewrite and polish.

I attended my first writing conference and learned I needed an agent. I sent proposals off to agents and to a few publishers. I got requests for two partial manuscripts and one full, and shortly after signed with my agent. Six months later we had a book contract, and a little over a year later, (2 ½ yrs after the call to write), the book released. That in itself is a miracle, as many writers have manuscripts sitting in their files for years before they’re picked up.

God has been such an integral part of my writing career. He’s sent amazing friends who are multi-published authors to encourage and aid me when I’ve struggled. One even recommended me to Summerside for my first Love Finds You book. 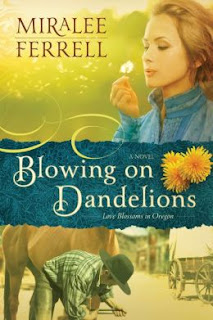 I went on to write four books for their line, and then David C Cook signed me for my Love Blossoms in Oregon series (historical romance). The first of three, Blowing on Dandelions, just released. I’m so excited about this book, as I know that God put the storyline on my heart. Blowing on Dandelions and The Other Daughter are both ‘books of my heart’ that were burning to be written, and ones that I truly believe will minister to the lives of women.

My husband asked me once if I’d have continued down this path if I’d known how much work it would be, and I heartily answered Yes! Absolutely. I write because I love it and can’t imagine not doing so. Besides, God opened the door, and I’ll continue until He shows me it’s time to set my computer aside and move to something else, or until He takes me home, whichever comes first.

To enter the contest for a copy of Miralee Ferrell's book: "Blowing on Dandelions":
leave a comment (and email address)
and become a follower of this site if you aren't already.
U.S. residents only.
Winner announced on my facebook page.

Thank you, Miralee, for Joining us This Weekend!

Friend, how about you? Choosing to follow God's will isn't an easy task at times. God sent specific friends to help Miralee. For me, He puts a song in my thought. What does He do for you?

Great interview! God is amazing how He works so differently in each person's life.

I sometimes feel like God is twirling me around and saying go this way for a bit and then He twirls me around and says the same so that I am advancing in small steps on several different fronts at the same time. Wondering if that makes sense or if it just means I am afflicted with ADD, LOL!

Sorry I have been away. I have a new smart phone and I am trying to get used to it and all its functions. I'm also trying to catch up on e-mail. Missed this lovely blog!

Oh my goodness, Janice, you have a smart phone? How awesome. You are so techy.

As for the twirls with God, isn't fun dancing different dances? Of course your comment made sense.

Great interview!! God does use different ways, people and things in our lives to give us direction. He's never used just one way on me, but I know when I haven't heard from him I stand still. It may be hard, but I tie a knot in my rope and hang on. He'll be there right on time. Thanks for sharing, Miralee! Enjoyed it!
Barbara Thompson
barbmaci61(at)yahoo(dot)com

I'm a follower!
Mary, you have great blogs! I love them!

Would love to win this and review it. It has been awhile since I read one of her books.
jrs362 at Hotmail dot com
I already belong to your feed Mary.

Of course. Missed not seeing you for a while. So glad you are back.

Wow! That was so fast. What a blessing. I tend to question God and ask "Are You sure? Really, really sure?" Then I ponder on it for an extended period of time...hmmm, saying yes right away may had something to do with being published so quickly. Quick to obey...thank you both for this post.

I think you might be right, Cindy. It seems easier to question God then to jump in and do what He says. But as we can see, jumping in can lead to wonderful blessings. :)

So happy I saw you tonight.

I've found that God uses different ways to get my attention or answer my prayer. I'm very thankful I know Him and have Him. I don't know how people survive without Him. Thank you for sharing, Miralee. I enjoyed it and your book sounds great. Thank you, Mary, for sharing wonderful authors with us. Please enter me in the giveaway.
Barbara Thompson
barbmaci61(at)yahoo(dot)com

I agree, Barbara. After weeks like my last one, I truly cannot understand how anyone could survive without the love and help from God.

You are entered, Barbara.

So glad to see you back this week :)

Wow, Barbara, great words! I am so glad I found your comment. Blogger nestled it in the span folder. Phew! So glad I saw it and could move it here for others to see.

Thanks for stopping by today:)

WOW Miralee. What a life story. Yes, that would have been a big shock, but I wish to know how it ended. I would love to win this book of yours. Have tried before. Also will have to look into the Other Daughter book. Thanks Mary for hosting Miralee. And, I do follow this blog. Please put my name in. MAXIE mac262(at)me(dot)com

Janice, I hear you, and I tend to be the same way--I think it's also called having too many irons in the fire (at least for me, LOL!)...but maybe it IS also God leading in different directions. If so, I need to discern which ones are my own paths and get off of them, so my life will slow down. So glad you stopped by!

Hi Barbara....I've been at the end of that same rope with the knot gripped tightly in my hands, waiting for God's intervention! Waiting on God is always the best place to be.

So glad to see you! Which of my books have you read? God bless!

Hi Cindy, thanks for your insight. I totally agree that obedience is absolutely the best path, when we know God has spoken. I spent two weeks praying about it before I jumped, but felt a peace in my spirit about following through. And of course, had it not been the Lord at all, then nothing would have come of my efforts and nothing would have been wasted but a little time and effort.

Hi Barbara, I heartily agree about needing God in our lives to survive this turbulent world! And thank you for entering...if you should get a copy of my book, I hope you'll enjoy it.

Hi Maxie,
I'm guessing you mean that having a young woman tell us she was my husband's daughter would have been a shock, correct? Yes, it was. Very much so, although I didn't feel betrayed or hurt (toward my husband) as the girl was conceived before we started dating and prior to him finding the Lord, unlike the heroine in my book. We didn't do any blood testing (there was no DNA test available that would have been affordable back then...close to 20 yrs ago), but her baby pictures looked very similar to other family and she had mannerisms and characteristics of my husband's family, so we accepted her claim. She's still very much a part of our lives and her kids are our grandkids.

Thanks for asking for the rest of the story, Maxie, I was quite curious too.
You are definitely entered in the drawing :)

Thanks so much for stopping by today. I always love chatting with you.