It's There - Set it Free 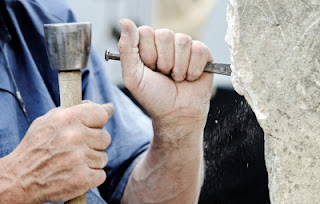 "God puts the statue into the marble, and artist merely cuts them loose." Michelangelo

He then proceeded to chip away and released the work within.


God begins His handiwork with us from the first day of our lives.

We are exposed to the world with our first breath.

We hear sounds and over time connect meanings to the vibrations.

We see those who care for our needs and over time connect meanings to the actions.

We read words in books and over time connect meanings to the ink.

And so much more. Take a moment and consider the work you have become over the years. Your loving Father has walked with you, guided you, directed you, so that no matter what came your way, He has insured you would see Him and His love for you.

So, Reader, please share one way God has showed you Himself and His love for you.
Posted by Mary Vee Writer at 1:00 AM

Besides salvation and healing this brought to mind how often, because of the sexual abuse I received as a child, I blamed God. I was furious at Him and did so many things displeasing to Him. Even when I got saved I found it hard to forgive God for being what I considered so remarkably absent in my childhood abuse. I would rant at God. People would say, "God loves you," and invectives would spew from my mouth.

After years of counseling with my pastor I finally got the image of the Love of the Father, and began to blame the real culprit satan for the abuse I received. I repented, and told God I was sorry. He said to me, in an inner witness, "That's okay, Heather. At least you were talking to Me."

He was willing to listen to my anger because He knew that by my talking to Him, even in anger, it opened the way for Him to minister to me.

God is so awesome and His love is so great. He can even handle anger and disappointment if it gets us to the point of healing.

Have a blessed day.
Heather

Heather,
What a powerful revelation you have experienced. Not many have walked the road you have. And some who have are still struggling.
Thank you for sharing your pastor's counseling and how it helped you.

What strength it took to write this response today. I really appreciate hearing from you and your testimony.