Today I welcome an award winner author,
a Christ-like lady who has a gift for compassion,
Sharon Dunn 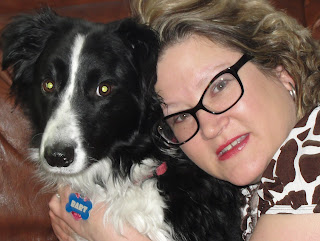 Enter to win Sharon's new release,
Guard Duty.
Scroll to the end of the post to see how to enter.

I first met Sharon at a Montana ACFW monthly meeting. It was held at Tracie Peterson's house! During the refreshment time, Sharon listened to my questions abut writing. She patiently taught me the answers. Talk about a wealth of knowledge! This was the only time the two of us went to the same meeting. Montana is a wide state with some pretty interesting weather. Frequently only members from one side of the state could attend. Still, that one meeting showed me what a Christ-like lady Sharon is. I asked Sharon to share how God has led her on her journey. This is what she answered:

God Knew Just What I Needed

I first fell in love with mystery and suspense when I read Nancy Drew mysteries in the fifth grade. My country school library had a whole collection of them with pink covers.

I began taking my career as a writer seriously when my oldest son was born.

Twenty years and three babies later, I am an award winning author of not only humorous mysteries but romantic suspense novels.

Writing is by nature a solitary activity. While I love it, it can get lonely. After back to back books, I was feeling a little burned out. God knew just what I needed, an opportunity to work with five others authors. 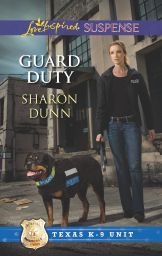 Each book features a separate police officer and their canine partner and of course has a romance element to it. My book had the only female officer in the series. Valerie’s K-9 partner is    Rottweiler named Lexi.

Even though you can read any book separately and get a complete suspense and romance story, all the books are linked together by a big storyline which concerns a missing police dog and a crime syndicate that has taken over Sagebrush, Texas, the fictional town where the books take place.

Though we each had a separate book to write, the work is very collaborative. We’re all on an email loop as well as having a place online to post files and pictures. A character who was the hero in book one, might have a walk role in book three. So we have to coordinate our descriptions as well as how the characters’ lives change from book to book. Also, the setting expands as each book is written, so we have characters frequenting the same businesses and restaurants and going to the same veterinarian.

Once all the books are turned in and the individual books have been edited, a continuity editor reads through the whole series to deal with any inconsistencies. For example, Valerie Hansen wrote the book after mine, Explosive Secrets. Her heroine makes a brief appearance at the end of my book. In my book I said her heroin was four months pregnant.  At the beginning of Valerie’s book, the same character was three months pregnant. I just don’t think that’s physically possible. All those oversights need to be dealt with. 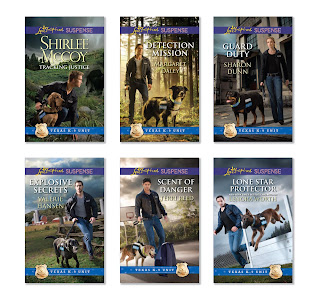 The whole process rejuvenated me and helped me get my enthusiasm back for writing. Also, I am a recently converted dog person since I got my border collie Bart from the shelter, so it was cool to write about the special relationship between dogs and people. For years, I thought I was a cat person, but Bart changed all that.

Sharon is officially one cat away from being a Crazy Cat Lady (she owns three; you have to have four to be official). She spends her free time with her husband of twenty four years, three teenage children and a very nervous border collie named Bart. Her hobbies include reading, walking, trying to find things around the house and making pets out of the dust bunnies under the furniture. You can read more about Sharon and her books at www.sharondunnbooks.net


To enter the contest for an autographed copy of Sharon's book: "Guard Duty":

Thank you, Sharon, for Joining us This Weekend!

Reader, have you participated in a group for a project/cause? While there can be challenges working with others, there can also be great benefits.

God has blessed me by participating with the Writers Alley group. We are ten writers learning, teaching, sharing, and working towards our next publication. Writers Alley
Posted by Mary Vee Writer at 1:00 AM

I've helped with a car wash and cleaning up trash with my church group to help raise money for a mission trip I went on last year, as well as a rummage sale. Talk about a headache but totally worth it. Communication was the part that almost derailed everything. God helped us to achieve our goals!
jennydtipton[at]gmail[dot]com. Whenever my mom and I see a book written by you we automatically get it because we know it's going to be good! Thank you for all your hard lonely work, I really appreciate it!

Enjoyed the interview! It's interesting to me that you have six books in a series and each one is written by a different author. That is definitely communication.
barbmaci61@yahoo.com

Cleaning trash certainly is a humbling experience, but sure has great rewards. Where did you get to go on your mission trip?
So glad that you and your mom have been reading Sharon's books! Thanks so much for stopping by today, Jennifer.

Hi Barbara,
I've seen several groups of authors join in a combined venture and each turns out a nice product with great variety.
Thanks for stopping by today, Barbara.

Sounds like a good topic for this bunch of books. Another new author to me. Please put my name in.
maxie mac262(at)me(dot0com

How interesting to know how authors collaborate on series that they write together. I've often wondered how they worked it out. This book sounds really great! I find stories on K-9 units so fascinating. :)

I've enjoyed your other books and would like to win a copy of this book.

As you wish, Maxie :)
So nice to see you here today. The topic does look good. An exciting series. :)

Hi Kara,
So nice to see you here today.
I have a friend who just signed a contract to be in a series as well. So I guess they have been happening. When I think of older series like The American Girl Doll books, they too had different authors for the different books.

Loved having you here.

Hi Heidi, so glad to see you here today.
Yes, of course you are entered, and thank you for being a follower.
I sure hope to see you stop by again in the future.
Blessings on your day.

I love your Ruby Taylor series and this new one looks amazing! I've worked in groups volunteering and am on a committee at work. Sometimes it's frustrating when it feels like things don't get done. I'm a follower. shopgirl152nykiki(at)yahoo(dot)com

Veronica, so glad to hear you like the Ruby Taylor mysteries series. those books are near and dear to my heart. I was never very good at group projects in school. The only sport I did was a solo one, long distance running. But writing is different, this series allowed us each to have control over our own book. Writing one book with another author I think would be a challenge.
sharon

Jennifer thank you for getting more books. So glad you like them.

I hope I am not too late to enter for this book. I tried to post on Friday but the computer would not stay connected to the service and then we were out of town for our son's graduation.

This series of books sounds really neat. I have not read any books with dogs as characters in quite awhile.

The main projects I have been involved with have been church related such as VBS and Sunday School teaching. I love it when the efforts of people working together result in a much greater outcome than just the individual parts would be able to do when going separate ways.

Veronica,
Working with groups can have their problems, on the other hand, the fellowship tips the woes into blessings. So glad to have you here with us.

You are just in time, Janice. So glad you had a chance to enter. Computer service can be fickle at times. So glad you have the opportunity to work with your church programs. :)