Today I welcome the author who will make you laugh, shake your hand,
and pull you into an intriguing story: Jim Rubart.

Enter to win a copy of Jim Rubart's book Soul's Gate, see below.

I first saw Jim in a hilarious skit put on by My Book Therapy during the 2011 ACFW conference. His novel Rooms was a major topic in the bookstore. I picked up a copy and became intwined with the story. I had the privilege to talk with him again at the 2012 ACFW conference.


When I heard his new book Soul's Gate had been published I asked him to come tell his writing journey.

I asked Jim to share his writing journey. Here is what he wrote:

So many authors. So many different journeys.

I’ve yet to hear the story of publication from one of my author friends that is typical, yet they all have one element in common: It was hard. Excruciatingly hard.

In other words, it’s okay. This road you’re on with all its blindsides and potholes and jagged cliffs with no guardrails? It’s not unusual. You’re not alone.

My own writing road had a dead end sign on it of my own making. I’d dreamed of being a novelist since I devoured the Chronicles of Narnia in 5th grade. But when I was rejected for my school newspaper in 9th, I accepted the fact I had no talent as a writer. (I know, I know, so let me ask, what “facts” have you accepted about yourself?)

But I kept dabbling in the dream. In my teens and early adult years I:

•    Subscribed to Writer’s Digest
•    Bought books on writing prose and screenplays
•    Scribbled a few short stories
•    Went to local writer’s workshops
•    Wrote a Seinfeld episode in ’92 with a buddy on a whim which ended up in the hands of a prominent L.A. TV writer
who said we had true talent
•    Wrote Web sites, radio ads, brochures, letters and TV ads for a living

But my dream of writing a novel? I did nothing. NOTHING!

(Well, I did think about it. A lot. And carried around this sack of nine-hundred pound guilt because I knew I should be taking action.)

Finally, in the spring of ’06, I went to my first writing conference. By summer I had three agents interested in repping me. In September of that year I signed with a fourth. A little less than two years later I had a contract for ROOMS.

Maybe your dream isn’t writing. It’s painting. Or music. Or opening a restaurant. Or taking that trip to Israel or the Bahamas, or doing missionary work halfway across the globe.

No one with a goal or a dream gets it easy. Just doesn’t work that way.

I like watching Biography and the one thing that has struck me harder than anything else is how tough it was for EVERYONE.

Here are a few of the stars I’ve watched profiles on:

It’s fascinating to see where they came from, what got them there and what they had to go through to get there. I had this idea that most stars walked into their gifting/destiny with a few minor pebbles in the road, not a street where bombs had gone off and were still exploding.

ALL of the stories revealed serious setbacks before these stars achieved fame and fortune. All.

A repeating mantra when outsiders describe these people is, “They were so incredibly determined.”

“They worked harder than anyone else.”

“They knew what they wanted, fixed their eyes on it and refused to give up.”

“No one came to see them at first, but they didn’t care. They just kept at it.”

It comes down to this: You have to believe in yourself. When no one else does. There is no other choice.

There is no other road.

Is your dream sitting in the back of a dark rusted shut drawer somewhere? What is it?

Grab the crowbar, let’s get moving.

James L. Rubart is speaker, marketing professional, and a best-selling, award winning author. Publishers Weekly says this about his latest release, SOUL’S GATE: “Readers with high blood pressure or heart conditions be warned: this is a seriously heart-thumping and satisfying read that goes to the edge, jumps off, and “builds wings on the way down" 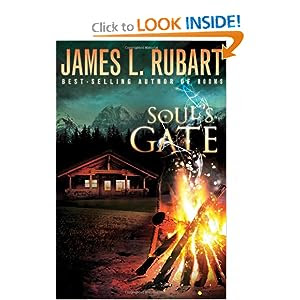 RT Book Reviews made SOUL’S GATE a Top Pick and says, “Rubart’s novel is enthralling and superlative. Truly a story about freedom from things that we hold onto, this tale will captivate readers and encourage a more active, dynamic spiritual life. The original plot and well-drawn characters elevate this book to “must read” status.”

During the day he runs Barefoot Marketing which helps businesses and authors make more coin of the realm. He lives with his amazing wife and two sons in the Pacific Northwest and loves to dirt bike, hike, golf, takes photos, and still thinks he’s young enough to water ski like a madman. More at www.jameslrubart.com

Thank you for joining us today, Jim.

If you would like to enter the drawing for the book, leave a comment and become a follower. Winner announced Monday. Sorry, U.S. residents only.

I haven't met Jim, but attending the Pitch and Promotion scrimmage for MBT this year before ACFW, and his talk about marketing really stuck with me.

My dream is simple: to write and to change lives through that writing. Well, God changes the lives, but you know what I mean.

I love that the road isn't easy. It means it's worth pursuing.

The blessings of writing in CBA is we hope for more than mere entertainment, we hope for changed lives.

Sometimes, though, I wish the road was easier. I'd still pursue it:)

There are so many reasons to like Jim Rubart.
Here's another one:
He hands people a crowbar and tells them, "Now go after that dream!"

When Jim talks, I listen.
Yeah, it's been said before about the John Hancock guy, but I don't listen to him.
Jim Rubart -- yes, him I listen to.

I love reading about Jim Rubart's writing journey. To know that someone so gifted and so knowledgeable had to overcome his own lies and struggle to achieve his dream gives me hope.

Listening to him at the Pitch and Promotion scrimmage I learned so much. Thanks for sharing him here today, Mary.

You're welcome, Jeanne.
Just thinking, based on your comment, he could write his own story and keep with the MBT guides. :)
Thanks for stopping by, Jeanne.

Jim's journey is indeed inspiring! Loved his tale of perseverance and his encouraging words.

Yeah, me too, Cynthia. Thanks for stopping by.