Enter to win a copy of Chris Fabry's book Borders of the Heart, see below.

I first met Cristóbal in a text book while in school. I must admit our friendship tends to renew only each October. He has a very busy schedule. I don't mind, at least he squeezed in a moment with all of us today.  I asked Cristóbal to share that day, October 12th in 1492.

After All These Years

First, let me thank Mary Vee for inviting me today. From the first moment I received her request, I counted the days remaining to be with all who visit during my stay. I look forward to your comments below and will have Mary record my responses.

Now, as asked, I will tell you about that day, October 12th, 1492. I remember it as though it happened today.

The sea air flowed through my nostrils and whipped the flag raised high above my head. Only a few days before, the crew from all three ships threatened mutiny. The food bins had crumbs, and the water containers nearly dry. Rations barely gave the men energy to hoist a sail.

Many of the sailers had been forced, paid extra, or promised gold if they joined the crew. Some of them thought the world was flat. And then there were those who thought the ocean was filled with sea monsters, which had been created to swim about the ocean waiting for some pudgy sailor to figure out he should sail west. The menu had been planned, tasty sailor with sea salt.

Their fear fueled their anger.

Queen Isabella was listed among the very few who believed in my plan for a journey west to discover a faster, more efficient way to transport goods and services to and from China and other eastern countries.

The sailors might have fared better had we landed within the estimated time, or perhaps a day or two extra at the most. If the good Lord didn't bring a sign of land soon, the sailors would mutiny and turn the ships about. Huh. A lot of good that would do, they'd starve before reaching on their home soil.

I asked the men for three more days. If nothing appeared, we'd turn back. According to my calculations the man in the crows nest should spy China's shore any moment. I waited as a child on Christmas eve.

And then came the words. Not "Land ho," instead we heard, "Birds." The creatures only ventured so far from soil. I don't believe I wanted to see a bird more on any other day of my life. The men cheered and hustled to their stations, working with vigor.

We sailed ahead and found pieces of drift wood and other signs of land not afar. The wind picked up and pushed the sails toward the China coast. The cry from the nest above soon came, "Land Ho!"

I knew it. I knew it. India and her rich spices could be reached by sailing west. I danced around the deck with the other hands before pressing the crew to advance to shore. the bowsprit move as close to land as she could and anchor lowered. I took a select crew and boarded the longboats.

Never before had I seen a person from India. Would they be friendly and give us food? The men had been told gold could be found laying on the ground, even dripping from the trees. I didn't know. For the queen's sake, I hoped they were right.

My destination remained only a short distance away. I could barely breathe from the excitement. Years of research and attempts to convince any person who would listen to my ideas finally had an end. My palms were covered with sweat.

I didn't need to tell the men to row faster. Their excitement matched mine. Inches away from the shore I leaped out of the boat . . . and sloshed onto the shores of India.

I bowed my head and fell to the ground. At last. At long last. So many years of work and now, at last I touched the soil for which I longed.

I understand that you who are reading this today are on a journey as well. Perhaps you, too, have spent years researching, studying, seeking help, guidance, and supporters for your work.

I encourage you to press forward. Ride the oceans of rejection. Stand tall before those who say sea monsters will destroy your work. Push toward the goal burning in your heart and do not be anxious. If you have dedicated your work to God and have shown yourself a workman worthy of the task, you will receive the blessing.

Thank you, Cristóbal for visiting with us. I have but one question.

Yes, Mary? How may I help you?

Well, I was wondering, didn't you land on soil later known as the America's?

Yes. Well. (clears throat) At the time I thought I found India. I didn't know a large landmass later to be named the Americas stood in the way. I understand my discoveries were considered significant nonetheless.

Yes. They were. Thank you, again Cristóbal for your visit. :)

How about you, reader? How can we encourage you to press forward, ride the oceans of rejection, stand tall before those who say sea monsters will destroy your work, push toward the goal burning in your heart and do not be anxious? 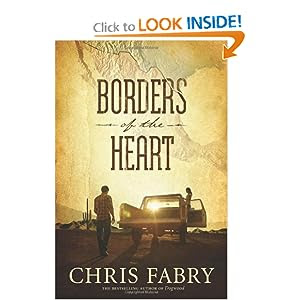 To enter the contest for the book Borders of the Heart by Chris Fabry, become a follower if you aren't already (see the upper right corner of this blog to join). And leave a comment. Please also include your email address (username (at) yahoo (dot) com) so I can contact you if you are the winner. The winner will be selected by a third party, random.org, and will be announced on Monday. U.S. residents only.

Loved that spirited writing about Columbus! Reading about those who have gone before and had success even when it wasn't what they expected encourages the reluctant to move along. God chooses the sometimes surprising outcome if we follow the steps He directs.

I just recently received my order for Borders of the Heart autographed by the author. He is my favorite author. If I should happen to win this book I will send it to Christian Library International which places books within the prison system.

You're so sweet to offer the book to others if you win. :)

Thanks, Mary, for sharing your wealth of knowledge.

Thanks, too, for helping us realize the importance of "pressing on" despite what may be unfavorable odds.

Confession, I had my daughter who is a history kid help me. I mean, Cristobel wrote it...sort of..but she corrected his mistakes.

All right. I came clean. But it sure was a fun post to write:)

One of the reasons Cristobal had such a difficult time, I think was because he didn't have a group of friends to encourage him. I thank God for the readers who stop and visit.

When I go to a bookstore, I am amazed that so many new books are being written. Doesn't it seem like everything has already been said? Then I read something you (or your daughter) has written and I am inspired.

Am praying for your hubby. Thanks for stopping by today.

Mrs. Maguire:
I only did light consulting on the article. My mom wrote the entire thing, and she did a great job if I do say so myself. I simply edited and researched.

Neat research!!! I am already a follower, but would love to win Chris Fabry's book! martha(at)lclink(dot)com

Aww, Thank you Carly.
I am blessed to have you.

You are entered to win, Martha and I am glad you are a follower:) The research was a fun project. It's amazing how much we remind ourselves/learn from little projects like this.