This is my opportunity to dedicate a day to the many special people God has made. I don't think I will every run out of people to feature on Friday because everyone has at least one thing special to share.

My first guest:  My hubby. 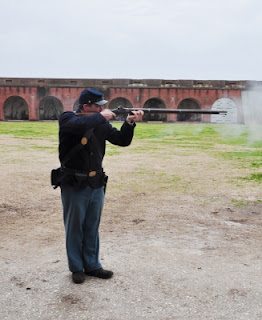 My hubby is a diehard nonfiction - documentary - historical - news reader only kind of man.


He does not like fiction. (poor guy, I'm working on him)


Still, my hubby has supported me with kudos, working out family schedules to find time for me to write, he's done dishes, and has taken on extra hours at work to pay for writer conferences.


When I can't figure out the best word for a sentence, I go to him, explain the scenario, and wait for the perfect word to fall from his lips.


His boring non fiction arsenal of knowledge has come in handy many times for me to gleam accurate details for a scene. Vacations revolve around many of the places he wants to learn about which includes buying "just one book". While he absorbs boring details, facts, and trivia, God gives me something fun to do.


Like the time he HAD to visit some Civil War battlefield in northern Georgia. The park ranger suggested we purchase the audio tour, which we did. We listened to some old guy narrate events at each stop on the map.


A rolling thunderstorm blasted into the park about the same time we pulled into the battle scene. We turned up the volume to hear the old guy tell the story over pelting rain sandblasting our car. As he explained events, the background sound effects grew louder to illustrate the battle. The Confederates moved forward, then the Union. . .  and the snare drums played louder.


At the exact same moment canon blasts from the audio tape sounded, thunder blared from the skies above. The timing was amazing. If we had left five minutes sooner or later, the storm would not have matched the audio. Talk about effect!!!!


To pay me back, my hubby went with me to the Empire State Building to see where Sleepless in Seattle was filmed, and Grand Central Park, for Home Alone II. We went to Ellis Island where my father-in-law first entered the United States and many other places as well.


All fodder for writing.


I am so blessed.


Thanks, to my sweet hubby.


Who has been your support for your career?

This was fun to read, Mary. It sounds like you and your hubby make a great team!!! Thanks for sharing. It's a great idea. :)

We do. I am blessed.
Thanks for stopping by, Patti. :)