Curiosity in a Remote Village in Honduras

Walk with me on this summer day as we step into Someone else's world.

Location: A Remote village in the Mountains of Honduras
An abandoned Wycliffe Compound 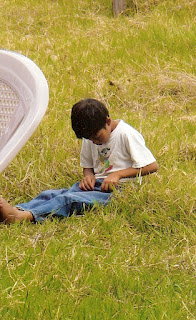 At the top of the hill overlooking a Wycliffe compound.


Watching doctors, nurses, child ministry workers, and teen translators on a one week missions trip. According to officials, medical workers rarely came to his village.

He probably couldn't discipher the cacophony of Honduran, Guatemalan, Nicaraguan, American, and Canadian languages spoken by the blended medical team sent to help his village.


But he watched and appeared to listen.

Early each morning, the team sat on benches and chairs arranged in a rectangle on a veranda made of broken cement. My chair leaned against the building affording me the view of a mountain to my right, the hospital center, and the hill where this boy sat to my left.

Our leaders presented devotions translated into the three needed languages by two teen translators. While intrigued with the message, I watched the boy progressively scooted down the hill, across the yard, and land at the edge of the veranda.

He ran his hands through the blades of grass plucking a few blades to fray. 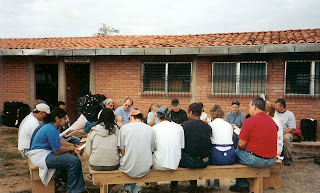 The medical team then sang praises to God, each member prayed in his/her own language, and listened to the Honduran team presentation of the week's mission: break into teams of three, go to villages tucked in the mountains far away from the road, open a day clinic, and minister to the needs of the people.

The American closed the meeting.


What intrigued the boy to move from the top of the hill toward our group? We didn't have games, movies, toys, gifts, or impressive acts. What curiosity drove him to sit only a foot away from the group and listen to the worship meeting?

I opened my eyes after the closing prayer and found the boy gone.


What do you think?